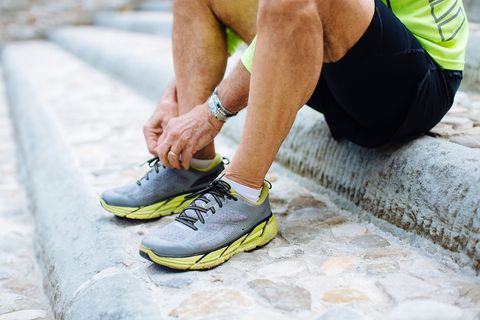 When the barefoot running and minimalist shoe trend was at its peak, curious runners were advised to transition gradually to more stripped-down footwear. Now it seems that same caution is warranted if you’re moving in the other direction, from traditional trainers to the mega-cushioned models known as maximalist shoes, according to new research.

For a study published in the Orthopaedic Journal of Sports Medicine, Oregon State University researchers brought 15 women runners into the lab on two occasions. Each time, the women’s biomechanics were analyzed before and after they ran an easy-pace 5K on the treadmill. The difference between the two visits was what they ran in: One time, they wore the New Balance 880, a traditional neutral trainer, with an advertised heel height of 35 millimeters and forefoot height of 23 millimeters. The other time, they wore the Hoka One One Bondi 4, an exemplar of maximalist shoes, with a 41-millimeter heel height and 34-millimeter forefoot height. All of the subjects were more accustomed to shoes like the New Balances than the Hokas.

Related Story
Lower Injury Risk By Not Stepping on the Brakes

The higher impact forces in maximalists probably can’t be attributed to the runners changing their foot strike pattern. All were initially assessed as heel strikers, and remained so when tested in the study’s two shoe models. One possibility: Some studies have found that runners change their degree of knee flexion based on how cushioned a shoe is; we tend to land with stiffer knees in more plushly cushioned shoes. Doing so could result in higher impact forces.

This finding is important because some studies have found an association between greater vertical forces and injury risk, especially lower-leg and foot stress fractures. Although recent research has identified horizontal, or braking, forces as a potential cause of injury, vertical impact forces shouldn’t be ignored.

“I think vertical forces still play a key role” in runners’ risk of injury, Chris Napier, author of the research on horizontal forces, wrote in an email. Napier said newer runners are probably more susceptible to injury from both vertical and horizontal forces than veteran runners.

Take Your Time to Transition

You may have heard that modern running shoes don’t require a break-in period. That’s true in regard to the shoe being ready to run in; if you get a new pair of your usual model, you should be able to immediately run in it as far and fast as in its replacement pair.

That’s why it’s important to note that the runners in this study were new to maximalist shoes. The no-break-in-period advice isn’t necessarily true in regard to your body being ready to run in a different shoe. If the shoe is different enough from what you’re used to, your body needs to learn how to most efficiently run in it.

That approach may have seemed obvious if, at the beginning of this decade, you were eager to try a minimalist shoe like the Vibram FiveFingers. This study suggests such caution is just as advisable if your new shoes have significantly more cushioning.

If the shoe is different enough from what you’re used to, your body needs to learn how to most efficiently run in it.

What does gradually getting used to the new models look like? Christine Pollard, the lead author of the new study, is conducting follow-up research to see if runners’ impact forces in maximalist trainers lessen as they become accustomed to the shoes. In Pollard’s current six-week study, the runners started by doing 20 percent of their weekly mileage in Hokas, then added another 20 percent per week (i.e., 40 percent of weekly mileage in the second week, 60 percent in the third week, etc.). In this model, if you run 30 miles a week, you would run 6 miles in maximalist shoes the first week, 12 miles in them the second week, and so on.

Even after your body has adjusted to dramatically different models, there will likely be differences in how you absorb running’s impact forces. And that’s good—one theory on why runners get injured cites a lack of variety (in shoes, surfaces, paces, and topography).

A 2013 study supports this idea. It found that runners who rotated among a variety of models had a 39 percent lower rate of injury over a 22-week period than those who did almost of all their running in the same shoes. If you’re considering moving to maximalist shoes, your best bet could be to have them be one, but not the only type of shoe you run in.

Scott Douglas Scott is a veteran running, fitness, and health journalist who has held senior editorial positions at Runner’s World and Running Times.
This content is created and maintained by a third party, and imported onto this page to help users provide their email addresses. You may be able to find more information about this and similar content at piano.io
Advertisement - Continue Reading Below
More From Health & Injuries
Why Do Runners’ Feet Swell?
8 Exercise Balls for a Better Home Workout
Advertisement - Continue Reading Below
How Psychology Plays Into Running Injuries
5 Ways to Stop Bug Bites from Itching
Why Do My Hands Swell While Running or Walking?
These Full-Body Deodorants Are on Sale at Amazon
Thoracic Mobility Moves for Back Ache Relief
What Does a High Resting Heart Rate Mean?
Researchers Say You Don’t Need Supplements
Move Fast to Get These Under-Desk Elliptical Deals