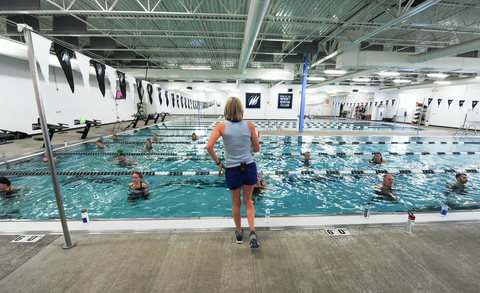 “The bleachers are on your right. The white line’s up ahead. Keep pushing!” Jennifer Conroyd calls out to me and the 30 or so other runners she’s coaching through an interval workout. We finish our hard effort, finally easing up when Conroyd prompts, “jog it out!”

She’s not just shouting out the directions for motivation: She needs to give these verbal cues, because in reality, the only track visible is the one she’s drawn on a whiteboard propped up next to her. My fellow athletes and I are sprinting side-by-side, without actually going anywhere at all.

On a beautiful summer morning, we’re indoors, our blue flotation belts tethered to lane lines in the pool at WEST Superior Training in Willowbrook, Illinois. The session, Fluid Running Athletics, is designed to emulate a track workout. Submerged from the neck down, we forgo the impact of hitting the ground, instead pumping our arms and legs against the resistance of the deep water—800 times denser than air, Conroyd reminds us.

It’s this reduction in impact that can help extend your running life, she says. As a frequently injured runner who’s recently entered the masters division, this sounds highly appealing to me, so I decided to give it a shot.

Related: Smash your goals with a Runner’s World Training Plan, designed for any speed and any distance.

Some of my classmates are like me—runners with injuries or who are just trying to avoid getting hurt. Others are different, and have never run a step on dry land. But today, we’re all driving hard toward the same goal. I really do feel like I’m giving it my all as I close my eyes and visualize sprinting toward the finish line. And thanks to a new app Conroyd has developed, H2GO, you can have a similar experience in any pool near you.

The Benefits of Underwater Training

Deep-water running isn’t a new idea: Runners borrowed it decades ago from horse trainers who used it to rehab or supplement their animals’ mileage, says University of Nevada-Las Vegas biomechanist John Mercer, Ph.D. Another researcher—Garry Killgore, Ph.D., of Linfield College in McMinnville, Oregon—first tried deep-water running when he was injured while competing for Oregon State University in the late 1970s. Then, he studied it for his doctoral research.

Conroyd, who used to work in marketing and advertising, first dove into the idea in 2010, when she tore her calf six weeks before the Chicago Marathon. She’d run the distance several times since she took up running in her 30s, but this race was different—her four siblings were joining her, raising funds in support of a nephew with diabetes. So she needed to find a way to be able to run that race.

Desperate, she searched online, and found an article about deep-water running. Conroyd emailed one of the authors, Boulder-based writer and running coach Kevin Beck. With his guidance, she took to the pool for the rest of her training.

There, she logged 20-mile long runs—three hours of keeping her heart rate around 140—and some of the hardest workouts of her life. One she recalls vividly? Five by five-minute intervals at 90 percent of her max heart rate.

It might sounds kind of out there, but research supports this approach, Mercer says: “When you look at the training studies, the majority have shown either there is no change in fitness or there is an improvement” when runners substitute deep-water running for land-based training. The programs that seem to work best involve higher-intensity intervals instead of solely moderate-intensity runs.

Plus, his own research has found the more intense the workout, the closer deep-water running comes to reproducing the complex muscle firing patterns of running on land. That makes shorter bursts of hard effort in the water more transferable from both a cardiovascular and neuromuscular perspective.

After weeks underwater, Conroyd did a test mile on land the Wednesday before the race. She felt no pain.

On the starting line, she thought: “If this works and I can finish this marathon, this is what I’m going do with the rest of my life.”

Not long after crossing the finish line, Conroyd flew to Canada to take courses in deep-water training. She began coaching runners one-on-one, then teaching classes. Fluid Running, as she branded it, was born less than a year later.

The courses Conroyd and her 11 instructors teach in the Chicago suburbs draw loyal fans like Tiffany Cruickshank, 48, who owns two shoe stores—Peak Running and Peak Running with a Twist—in the area. The ultrarunner and marathoner used Fluid Running to strengthen her body for spine surgery and then to ease back into the sport after her operation. “This was an integral part of my recovery,” she says.

Two years later, she’s back up to about 60 miles a week and training for the California International Marathon this December, hoping to beat her best time of 3:09. Still, you’ll find her in the pool with Conroyd at least once a week. The constant pressure of the water provides a sensory cue she uses to focus on her form, which she brings to her land-based workouts, too, she says.

“Every time I go, nothing hurts, and I leave energized,” she says. The only time she hits the road is for 5K races, where she routinely wins her age group. “I’m definitely stronger.”

Buoyed by such success stories, Conroyd dreamed of taking Fluid Running to every pool in the country. She created an instructor certification course, but found controlling the standards challenging. Plus, pools didn’t want to tie up three or four lanes at a time, limiting the places the classes could be offered.

“Every time I go, nothing hurts, and I leave energized.”

That’s when the idea for the app was born, as a way to make these underwater running workouts more accessible to a greater number of people. After a year of development, Conroyd launched H2Go in June.

For $199, runners receive a kit that includes a flotation belt, waterproof Bluetooth headphones, a tether, instructional videos to learn Fluid Running technique, and 45- to 60-minute audio workouts. If you already have headphones or a belt, you can order components of the system individually.

To use it, you’ll download the app, and strap on the belt and tether. If you find yourself sinking, you can wrap another belt around your front, or tuck a pull buoy under the front of your belt. Then, leave your phone on deck while you listen through the headphones. Conroyd’s voice guides you through one of three workouts right now (with more on the way, for an additional cost).

Ultrarunner and coach Adam Kimble, 31, of Tahoe City, California, has used Fluid Running since meeting Conroyd at a conference in 2016. At the time, he was preparing to break the Guinness World record for running across the country (which, at the time, was 46 days, 8 hours, and 36 minutes). He hit the pool to add miles and avoid inclement weather while training, and he even hopped in four or five times en route to flush out his legs. Ultimately, injury still prevented him from breaking the record, but he did finish the run— 2,500 miles in 60 days.

Deep-water running “is definitely something that I recommended in theory for athletes I coach, but didn’t really give them a great way to implement,” he says. The H2Go app—of which he was an early tester—solves the accessibility problem and banishes the boredom that prevents some runners from staying in the pool long enough to reap benefits. “Having a voice talking you through things helps you to stay more focused and not get distracted.”

How to Use Underwater Running

There are three main ways to use underwater running: The first is to keep training while you’re injured. Along with helping maintain or even improve your fitness, the blood-pumping pressure of the water potentially improves recovery and speeds healing, says Mercer. Secondly, you can use it to add mileage to avoid injury while training for a race. Just limit your pool time to one or two runs a week, since your body needs to acclimate to the pavement pounding, says Conroyd.

The final way to use it is to simply boost your non-performance fitness goals, whether they be weight loss or overall fitness. For instance, if you’re looking for a greater calorie burn, shed the belt and use your arms to keep to keep your head above water, says Mercer.

Motivated to take the plunge yourself? H2GO gives in-depth form tips, but in brief, Fluid Running mimics running on land—you keep your core tight, shoulders back, and legs directly underneath you. Visualize yourself running, but with an imaginary string holding you two inches above the ground, Conroyd says. Killgore recommends a slight forward lean, as if you’re running into a headwind, to engage your hamstrings and glutes.

Researchers like Mercer have also studied a high-knee version of deep-water running that looks more like stair climbing in place; it’s easier to learn, though it might not translate as well back to running on land.

One big challenge is gauging your effort. Even a waterproof GPS watch won’t tell you how “fast” you’re going when you’re largely stuck in one spot. Conroyd recommends wearing a heart-rate monitor if you have a waterproof one; her workouts cue periodic quick checks of heart rate even if you don’t. Just add 10 to 15 beats per minutes to the total to match what you’d measure on land, because heart rates run lower and drop more quickly in the deep, perhaps due to the hydrostatic pressure of water speeding blood flow away from the heart.

You can also judge your effort by your rate of perceived exertion (RPE)—how hard you’re working on a scale of total relaxation to all-out effort—though you’ll have to adjust that for an underwater workout, too. “If you’re trying to mimic a run on land, you’ve got to try harder in the water,” Mercer says. Noting both your heart rate and your RPE, and seeing how they match up, can increase your understanding of how hard you’re working in the water relative to land-based efforts, he notes.

And because hydrostatic pressure works on your digestive system too, undigested food may squeeze back up and cause gastrointestinal distress; Conroyd recommends not eating for an hour and a half before the workout (though when she did her 20-milers in the pool, she did use energy gels). Do bring along a water bottle—you’re still sweating, even if you can’t feel it.

Hydrate Your Runs With These Bottles

Armed with these tips, the week after my class, I took the H2GO app to the Chicago Park District pool a half-mile from my house. It’s eight feet deep, outdoors, and has adult swim weekdays from 9 to 10 a.m. I tethered myself in a corner and hit play, while women in bathing caps and Speedo-clad men did laps around me. It’s not quite the same as my beloved Chicago Lakefront Trail. But if the upshot is that a day underwater keeps me out on a path for a few more miles—or even years—it just might be worth it.

Cindy Kuzma Contributing Writer Cindy is a freelance health and fitness writer, author, and podcaster who’s contributed regularly to Runner’s World since 2013.
This content is created and maintained by a third party, and imported onto this page to help users provide their email addresses. You may be able to find more information about this and similar content at piano.io
Advertisement - Continue Reading Below
More From Marathon Training
5 Tips to Settle Your Stomach on Race Day
Tested: Speed’s Effect on Stride Rate
Advertisement - Continue Reading Below
How Do You Find the Right Training Intensity Ratio
The Michigan Running Workout Tests Your Endurance
Fast and Flat Boston Qualifying Marathons
Coaches’ Tips for Tackling the Boston Marathon
What Is Critical Velocity Pace?
Shoes That Can Go the Distance
Should You Change Your Stride Length?
What Exactly Is Running Power?