Today's Top Stories
1
A Marathon in 2 Weeks? Keira D’Amato Will Be Ready
2
Make Music Your Ultimate Training Partner
3
Legendary Marathon Coach Bill Squires Dies
4
It Shouldn’t Be This Hard to Be a Running Fan
5
I Tried the One Punch Man Workout Challenge 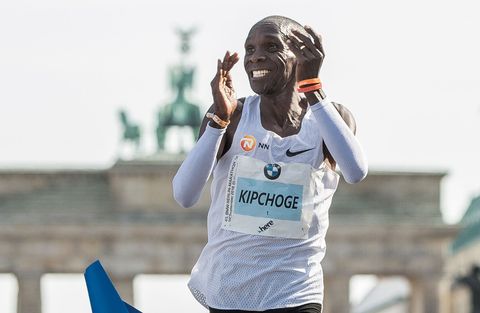 Yesterday Eliud Kipchoge ran 2:01:39 at the Berlin Marathon to break the world record, becoming the first person in history to go under 2:02 on a record-eligible course. Here are a few fun facts in the wake of Kipchoge’s mark.

Related Story
How to Watch the INEOS 1:59 Challenge

Kipchoge’s average pace for one lap of a standard outdoor track: 69.19 seconds

Kipchoge’s split for his second half marathon: 60:33

Number of Americans who have run faster than 60:33 for a half marathon on a record-eligible course: 3 (Ryan Hall, Leonard Korir, and Dathan Ritzenhein)

Average of Kipchoge’s five fastest marathons on a record-eligible course: 2:03:21

Amount by which Kipchoge lowered the world record: 1:18

Last time the men’s world record was broken by a larger margin: 1967 (Derek Clayton broke it by 2 minutes and 24 seconds)

Amount by which the men’s world record has fallen since Kipchoge was born on November 5, 1984: 6:26

Number of times the men’s world record has been broken since 2002: 7

Number of those new records set in Berlin: 7

[Smash your goals with a Runner’s World Training Plan, designed for any speed and any distance.]

Scott Douglas Scott is a veteran running, fitness, and health journalist who has held senior editorial positions at Runner’s World and Running Times.
This content is created and maintained by a third party, and imported onto this page to help users provide their email addresses. You may be able to find more information about this and similar content at piano.io
Advertisement - Continue Reading Below
More From Marathon
What It’s Like to Run Back-to-Back Marathons
Runner Makes Guide to Nonbinary Inclusion in Races
Advertisement - Continue Reading Below
What to Know About Boston Qualifying Times
Fast and Flat Boston Qualifying Marathons
Just How Bad Is Heartbreak Hill?
What You Need to Know About the Barkley Marathons
How Keira D’Amato Set the American Marathon Record
Puma Continues Investing in Women’s Marathoning
26 Tips for Running Your Best 26.2
We Raced Boston to Test Saucony’s Endorphin Pro+