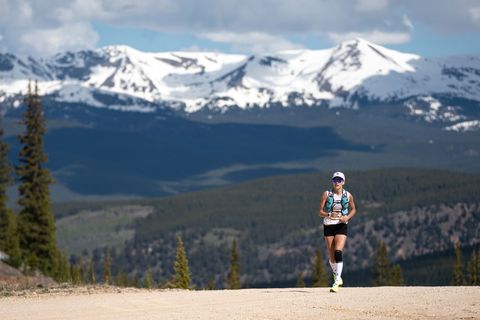 Even with decades of experience running at the highest levels in the sport, Kara Goucher is still pushing her limits. Goucher made her trail racing debut on Saturday at the Leadville Trail Marathon, where the two-time Olympian said she experienced the most difficult competition of her career.

With bouts of altitude sickness, Goucher, 40, ran through some extremely tough moments in Leadville, Colorado. But with encouragement from supporters along the course, the marathoner fought through the challenges to finish fifth and win her age group.

“I’ve never been so low and continued on, so I guess I found out that I’m tougher than I thought,” Goucher told Runner’s World. “I think of myself as a pretty tough person, but I’ve never been in such a pain cave as I was yesterday. I mean, I was in such a dark place that I’ve never experienced before.”

Without a doubt, the hardest thing I’ve ever done in my life. Lots of dark moments today, thank you fellow athletes and spectators for getting me through. Massive respect not just for the amazing winners today but for everyone. That was tough as 🤬! #leadvilletrailmarathon pic.twitter.com/160VSG2gvD

With a storied career on the track and the roads, which includes a silver medal at the world championships and three top 10 finishes at the Olympic Games, Goucher announced her transition into trail running this past spring.

“I’m not going to try to light the world on fire or prove anything,” she told Runner’s World in March. “But the more comfortable I feel, the more enjoyable the experience will be. I know I may twist an ankle, but for so long, I’ve been afraid of falling and hurting something that would keep me from running. Right now, the reward is worth it, because it’s a new adventure.”

Five months after a disappointing DNF from a hamstring injury in the Houston Marathon, the next adventure took place on Saturday in Leadville, which is about two hours away from Goucher’s home base in Boulder.

Heading into the race, her goal was to run between 9-10-minute pace. With the first six miles being uphill, her initial plan was to run the first portion of the course no faster than 10:30 pace. But she completed the first 10K in 51:25 (8:18-minute mile pace), much faster than she planned. She said that decision cost her later in the run.

[Build your personalized and adaptive training plan for the roads or trails for FREE with Runcoach.]

Around mile 11, Goucher said she started to feel sick from the significant altitude increase. Because of extreme snow conditions this year, race organizers were forced to re-route the 2019 course, which resulted in 26.2 miles with 4,033 feet elevation gain and a maximum altitude point at 11,710 feet.

From miles 16 to 18, Goucher entered a “sufferfest” where she vomited and kept running. She seriously considered dropping out of the race, but thanks to the encouragement from fellow competitors, spectators, photographer Todd Straka, and her husband, Adam, Goucher was inspired to continue on.

“There were a lot of really dark places where I was throwing up and questioning, honestly, life [laughs] and why I was doing this,” Goucher said. “And the community, I mean people were just so nice the whole time and encouraging me and walking with me and getting me through those rough spots.”

Goucher even admitted that if she had been running a marathon on the roads, she would have dropped out at mile 15. The encouragement of the trail running community, however, helped her persevere.

“Honestly, they just wouldn’t let me quit,” she said. “And I just can’t thank everyone enough because today I feel such a sense of accomplishment.”

While Goucher isn’t looking ahead to any specific trail races just yet, the experience of pushing through the pain did make her consider the possibility of trying longer trail distances in the future, but only competitions that take place at a lower altitude.

While her debut presented an entirely new range of challenges, Goucher also walked away with a new feeling of confidence in herself.

“Normally when a race goes south like that, I feel pretty disappointed after, but I actually feel a sense of pride because it was for sure the hardest thing I’ve ever accomplished,” she said.