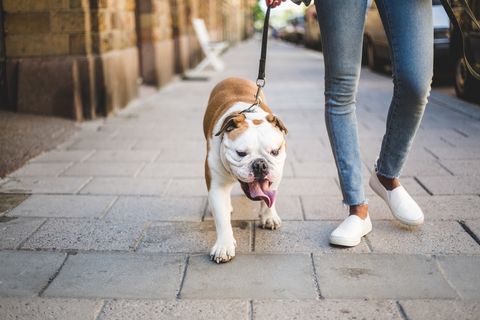 Advice from major entities like the World Health Organization, U.S. Department of Health and Human Services, and American Heart Association all sync together: Get either 150 minutes of moderate-intensity aerobic activity or 75 minutes of vigorous activity per week.

But what a recent study suggests is that low-intensity activity counts, too. Walking your dog, washing the dishes, puttering around the hallway waiting for the conference room to empty—it all counts, even if it’s done for a few minutes or a few seconds.

Published in the British Journal of Sports Medicine, the study looked at a group of just over 1,500 men who first supplied health and behavior information in the late 1970s, and then again in 2016. Researchers examined the connections between sedentary behavior, different intensities of physical activity, and risk of early death. They outfitted the participants with fitness devices that recorded activity intensity and duration per day for at least three days.

As many studies have concluded before, there was a link between being sedentary and being more likely to die at a younger age than other participants. But when it came to physical activity intensity, there wasn’t much difference, according to study co-author I-Min Lee, M.D., professor of medicine at Harvard Medical School and professor of epidemiology at the Harvard T.H. Chan School of Public Health.

People who hit 150 minutes of physical activity in sporadic bursts were 41 percent less likely to die over the five-year follow-up than those who did not hit the recommended amount, while those who reached 150 minutes in exercise increments of 10 minutes or more cut their risk of premature death by 42 percent.

“Basically, all activity is helpful, not just higher-intensity activity done in bouts of at least 10 minute sessions,” she said. “Previous activity guidelines required this 10-minute minimum, but new scientific evidence such as this study indicates all activity counts.”

Although the study focused only on older men, Lee added that it applies to women and younger people as well.

There’s accumulating evidence that moving more, even in those super short bursts of low- to moderate-intensity activity can have an incredibly wide range of benefits, particularly for older adults.

Not only will you lower risk of early death, as this recent study suggests, but previous research has connected more movement to lower levels of dementia and depression, better bone density, and less incidence of potentially serious falls among many other advantages.

Plus, your dog will get walked and you’ll get your dishes done, so it’s a win-win.

Elizabeth Millard Elizabeth Millard is a freelance writer focusing on health, wellness, fitness, and food.
This content is created and maintained by a third party, and imported onto this page to help users provide their email addresses. You may be able to find more information about this and similar content at piano.io
Advertisement - Continue Reading Below
More From Health in the News
Major Studies Show Exercise Helps You Live Longer
Wear a Fitness Tracker to Move More, Study Says
Advertisement - Continue Reading Below
Why Your Achilles Might Always Hurt
Higher Fitness Leads to More Runner’s Highs
Why It’s Common for Runners to Drink Postworkout
Why SMART Goals Aren't Always Smart
Research Supports Running Post Vax
Struggling With Dry, Itchy Eyes? Go for a Run
How to Exercise to Prevent Pain as You Age
Can Drinking Beer Wreck Your Workout Progress?