Modernizr && le ? m i : f i
1
A Marathon in 2 Weeks? Keira D’Amato Will Be Ready
2
Make Music Your Ultimate Training Partner
3
Legendary Marathon Coach Bill Squires Dies
4
It Shouldn’t Be This Hard to Be a Running Fan
5
I Tried the One Punch Man Workout Challenge 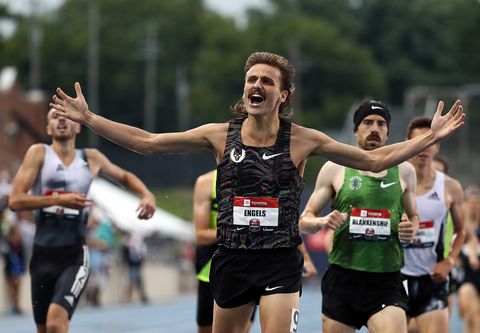 An elite runner with a reputation as a fun-loving guy has had some serious matters to attend to during his offseason.

Since he finished 10th in the world championships 1500-meter final on October 6, Craig Engels has been traveling and “partying,” but it hasn’t been all fun and games. His first order of business: securing a training situation for the future.

That became more clear on Wednesday.

Seven athletes who ran for the Nike Oregon Project (NOP) will continue to train together in a new group led by former NOP assistant coach Pete Julian.

Nike announced it was shutting down the NOP on October 10 after the group’s head coach, Alberto Salazar, was suspended for four years for anti-doping violations.

In addition to Engels, the new group will include U.S. runners Donavan Brazier, who holds the American record in the 800 meters, Shannon Rowbury, and Eric Jenkins, as well as Konstanze Klosterhalfen of Germany, who won bronze in the 5,000 meters at worlds, Suguru Osako of Japan, and Jessica Hull of Australia. Those seven runners were training primarily under Julian before Salazar’s ban.

Julian, 48, announced the news of the new group in an Instagram post on October 21, his first and only post on the social media platform. In it, he said the group does not yet have a name. He left open the possibility for “perhaps even a few more athletes in the future.”

In an interview with Runner’s World, Engels, 25, said that continuing to work with Julian had been his first choice since September 30, the day Salazar’s ban was announced during the world championships in Doha, Qatar.

The only complication would have been if Nike didn’t want to retain Julian as a coach, Engels said. “I don’t know why they wouldn’t, but you have to have plan B and C,” he said. “I would have gone back to Ole Miss [his alma mater] and been coached by [Ryan] Vanhoy or my high school coach, Chris Catton, and be coached by him.”

Engels said the group would likely remain in Portland, where the team has access to Nike facilities and experts, including physical therapist and strength coach David McHenry. They enjoy training in Phoenix during the winter when it’s rainy in Portland.

It’s unclear who is now coaching the NOP athletes who worked under Salazar: marathoners Jordan Hasay and Galen Rupp, and track athletes Clayton Murphy and indoor mile world record holder Yomif Kejelcha of Ethiopia. An IAAF release reports that Sifan Hassan of the Netherlands, who set the mile world record (4:12.33) this summer before winning two golds in Doha, is currently being coached by Charles Van Commenee of the Netherlands.

There was some crossover between Julian’s athletes and Salazar’s athletes, Engels said. He would do workouts occasionally with Murphy and go on easy runs with him. Runners from the entire NOP would socialize, and when Engels spoke to Runner’s World, he was on his way to Fort Lauderdale, Florida, for Murphy’s bachelor party.

Engels graduated from the University of Mississippi in 2017 and joined NOP in November. He had heard that Salazar was under investigation for doping. Engels discussed with his family, coaches, and agent his best move for a pro situation.

“The unanimous decision was go train with Matthew Centrowitz, the reigning Olympic [1500-meter] champion from our country,” Engels said. “So that was my main driver, going to train with him. Obviously, everyone has their own moral compass. Part of me was like, oh, well, I know about these rumors, I can see first-hand if they’re true. And if they are, I can myself bring down the group, you know?”

Engels says he never saw anything related to doping with the group. Salazar’s suspension is based on activities from 2009 and 2011–2013. No NOP athlete has ever failed a drug test.

Centrowitz left the NOP in November 2018.

“He’s the perfect coach for me,” Engels said. “I love to go on weekend trips, I like to party and everything. I’m not saying he lets me party, but he knows when it’s right to let loose and enjoy yourself and relax. He knows I’m going to get the work done and trusts me.”

During the season he keeps his social life under control.

“If my roommates are having a party, I’ll go and have a few beers with them,” he said. “It’s just the people who are too cooped up and too regimented, sometimes they get injured more often, they’re not relaxed and having a good time and enjoying their life. That’s my main thing, if I’m going to do this sport I want to enjoy my life and enjoy the people in the sport and everything about it.”

Engels said his training has been slightly more difficult than it was in college, with more mileage, hard workouts done immediately after races, and lifting under McHenry.

He lives in a rental house in Portland with three other friends, none of whom are professional runners. On weekends in the summer, Engels and friends will drive an RV to different Pacific Northwest spots.

“We’ll go camp somewhere and do activities all day,” he said. “Sunday morning we’ll do a long run, do NormaTecs on the drive back and recover.” His RV can comfortably sleep three people, but they’ve had as many as six for an overnight.

[Build your personalized and adaptive training plan for FREE with Runcoach.

On a recent trip to Croatia after the world championships, Engels was involved in a wreck when his moped, traveling at 20 miles per hour, came out from under him. He landed on his feet but slammed into the side of a building, leaving him with a badly bruised hip. “It’s slowly getting better,” he said. “No big deal.” Engels has not seen a doctor, he said, and plans to resume his training on November 1.

“The crazy thing is how many times Sifan is drug tested,” Engels said. “When we were in St. Moritz [at altitude before worlds], I was there for three weeks and I think she probably got tested eight times. If someone is dirty, there is no way they are getting around eight tests.

“Also, she is literally the hardest worker,” he continued. “She hates me, by the way. I posted about Pete, and she absolutely hated it. She thought it made it seem like Alberto’s group was dirty and ours wasn’t. But I’ll defend her to the death. She does harder workouts than I do. She is the hardest worker I’ve ever seen in this sport. It’s crazy the workouts she does. And like, I don’t know—her whole world is about running and everything. It’s cool that’s her world, but I could never do that.”

Sarah Lorge Butler Sarah Lorge Butler is a writer and editor living in Eugene, Oregon, and her stories about the sport, its trends, and fascinating individuals have appeared in Runner’s World since 2005.
This content is created and maintained by a third party, and imported onto this page to help users provide their email addresses. You may be able to find more information about this and similar content at piano.io
Advertisement - Continue Reading Below
More From News
Walk to Prevent Knee Pain, Study Says
Mike Wardian Runs Across the U.S. in 62 Days
Advertisement - Continue Reading Below
Why Your Achilles Might Always Hurt
Legendary Marathon Coach Bill Squires Dies
It Shouldn’t Be This Hard to Be a Running Fan
Don’t Miss the USATF National Championships
Nikki Hiltz Officially Signs On With Lululemon
These High School Girls Have Run Sub-4:40 Miles
On-Site Childcare Is Coming to Select Track Meets
Keep an Eye on These NCAA Track Stars At Worlds