With a push just past the 40-kilometer mark, two-time world half marathon champion Peres Jepchirchir of Kenya won the women’s Olympic Marathon in 2:27:20 on August 7.

World record-holder Brigid Kosgei of Kenya, the last to hang with Jepchirchir, held on for silver (2:27:36) ahead of the fast-charging American Molly Seidel, who won the bronze medal in 2:27:46.

→ Join Runner’s World+ to stay up to date on the Tokyo Olympics!

“I can’t believe it. Just getting here was already a dream come true and to be able to come out today against a field like this and be able to come away with a medal for the U.S.,” Seidel told NBC after the race. “I’m in shock. I’m in disbelief right now.”

American Sally Kipyego finished 17th in 2:32:53, and U.S. Trials champion Aliphine Tuliamuk, who had been battling a hip injury the past couple of weeks, dropped out at 20K. The race was only Tuliamuk’s second after giving birth in January.

Today was just Seidel’s third marathon. She debuted at the U.S. Olympic Marathon Trials in February 2020, where she placed second in 2:27:31. She improved her PR to 2:25:13 when placing sixth at the elite-only London Marathon in October. Seidel’s bronze is the first Olympic marathon medal for an American woman since Deena Kastor won bronze in Athens in 2004.

“It takes 10 years to become an overnight success.” - marathoners

“I love the feel of the marathon. I love that slow grind and squeezing it down at the end,” Molly said after the race. “It is very different from some of the shorter races. I still love doing the shorter stuff and I hope to still do shorter races to keep that sharpness, but, man, I love this race.” 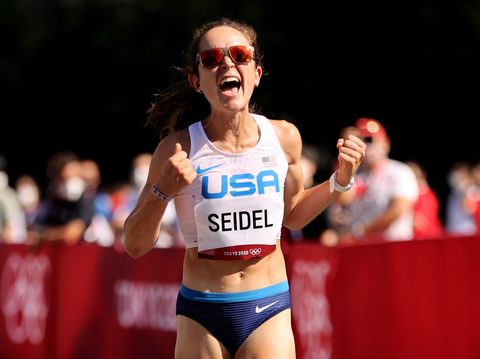 The race was held in Sapporo, Japan, a coastal city about 500 miles north of Tokyo, in an attempt to escape the extreme heat and humidity of the Tokyo summer. On Friday, the start time of the race was moved up an hour, to 6 a.m. local time, to further reduce the runners’ exposure to potentially dangerous conditions. Nonetheless, at the start, the temperature was 78 degrees, with 83 percent humidity and bright sun, only slightly more favorable than conditions in Tokyo at the time. The temperature climbed to 84 degrees by the time the medalists finished.

Eighty-eight women started the race, which began in Odori Park in the heart of Sappaoro. After two short, shaded laps within the park, the runners headed out for one long loop around the city. They passed Odori Park a little after the halfway mark, then did two shorter loops (the northern section of the longer loop) of close to 10K before finishing at Odori Park.

The women's marathon medalists of the #TokyoOlympics!

The early pace was predictably conservative, with 46 women within two seconds of each other through 10K in 2:33 marathon pace. A faster third 5K of 17:31, combined with the conditions, meant that the pack was down to 25 by the 15K mark, passed in 53:47. Seidel and Kipyego were among those almost always visible at the front. No big moves were made in the fourth 5K segment, but attrition caused the pack to thin to 13 by 20K, reached in 1:11:27.

Conditions were so draining that just a few minutes later, when the leaders passed halfway in 1:15:14, the pack was down to 10, including Seidel and Kipyego. Although two women were able to rejoin the lead pack before 25K (1:28:51), the fifth 5K was covered in 17:24, and soon after the pack was again 10 strong. Kipyego was one of the two who lost contact 90 minutes into the race.

The first big casualty came in the 29th kilometer, when Ruth Chepngetich of Kenya, the 2019 world champion who set the half marathon world record in April, fell off the lead pack. She wound up dropping out after about 20 miles. The pack was down to nine through 30K (1:46:04), with Seidel still looking remarkably fresh.

“Truthfully, I wanted it as hard as possible. I wanted it hot and windy knowing a lot of these women run really fast in conditions that are very good,” Seidel said. “I think I thrive off a little bit of adversity. The course in Atlanta (at the U.S. trials) was a tough, hilly course. When the going gets tough, that’s my strong suit."

Eight women were still in contention with 10 kilometers to run. Things can change quickly at that stage of a marathon, however, especially in heat and humidity. Just one kilometer later, the pack was down to five—Seidel, Kosgei, Jepchirchir, Lonah Salpeter of Israel, and Eunice Chumba of Bahrain. At 35K (2:02:58, for a seventh 5K of 16:54), Seidel and Salpeter continued to do most of the work. Kosgei had yet to assert herself.

Kosgei finally did with just less than 5K to go. She and Jepchirchir easily broke Salpeter and Seidel. Running with an ice pack stuffed down her singlet, Jepchirchir then took a slight lead while continually looking back at Kosgei. Salpeter, who had tried to stay with the Kenyan duo longer than Seidel did, started flailing immediately. Seidel eased past Salpeter, and the Israeli started walking. Salpeter wound up finishing 66th in 2:48:31. In all, 73 of the 88 starters finished.

At the fluid station just past 40K, Jepchirchir pushed, Kosgei couldn’t respond, and the gold medal was decided. 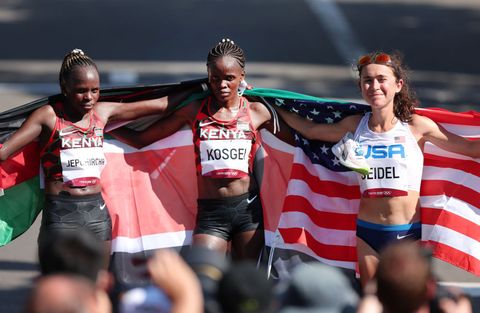 Let’s All Channel Mieke Gorissen After a Race

Inside Sifan Hassan’s Attempt at an Olympic Triple

Why Eliud Kipchoge Smiles When He Runs

What Was Behind Molly Seidel’s Shocking Bronze?

How to Watch Track and Field at the 2021 Olympics

All of Today’s Action From the Olympic Track