Olivia Baker was on the phone with her parents one evening in July when a call came in from an unknown number. She figured it was the U.S. Anti-Doping Agency, wanting to track her down for a drug test.

The 800-meter runner, who was in California for a track meet, told her folks to hang on while she answered the other call. But instead of hearing from USADA, she heard the voice of Preston Johnson, a board member of the USATF Foundation.

He told Baker that she was going to receive a $20,000 Stephen A. Schwarzman grant from the Foundation.

“I was overjoyed,” she said. “I clicked back over to my parents and I’m like, ‘I just got the best news.’”

The following day the USATF Foundation announced 50 additional athletes received $8,000 apiece. In all, 150 athletes in events from the marathon to the javelin to racewalk are getting some direct financial support from the USATF Foundation between these two July announcements, and the money is in the form of direct payments to them.

Agents, who usually take a 15 percent cut of athletes’ sponsorship deals and prize money, don’t get any portion of the Foundation grants.

For many track—and especially field—athletes who are trying to train and compete at the highest levels, these grants are life-changing. In some cases, they’re the difference between staying in the sport or leaving for a better-paying job.

Baker, 26, who trains in Atlanta with the Adidas-sponsored Atlanta Track Club (ATC), says she plans to use her grant in part to pay for her living expenses and also to fund some of the extras, like cryotherapy, a membership to the YMCA where she can use the sauna, and equipment for a home gym so she can do physical therapy exercises at night.

She had already experienced a breakthrough this track season, since she decided to put off going to medical school and continue running through at least 2024. Last September, she moved to Atlanta, where she has elite-level coaching, other 800-meter runners to train with, and financial support from ATC and Adidas. She broke 2 minutes in the 800 for the first time on May 20. Since then, she has broken it six more times, including setting her PR of 1:58.46 at the U.S. championships in the semifinal round. In the final, she finished fifth (which earned her $3,000).

In her new situation with ATC, Baker, who says she is living “frugally,” was already feeling more financially secure than she had since graduating from Stanford in 2018. Still, the USATF Foundation grant is “very meaningful,” she said.

It’s an unusual arrangement for an Olympic sport—direct payments to athletes coming from an outside foundation. And the USATF Foundation is independent from USA Track & Field, the governing body of the sport. A few board members serve on boards of both organizations concurrently—Max Siegel, Vin Lananna, and Willie Banks are on both now, and there have been others.

But the USATF Foundation has separate bylaws—and makes its own decisions. Many of the 45 board members of the Foundation work or have worked in finance, like Schwarzman, and give generously to the mission of supporting athletes. As their website states, the organization assists “dedicated Olympic hopefuls who can realize their dreams and potential if given the opportunity.”

Who needs the money?

To receive a USATF Foundation grant, athletes fill out a short application. It asks about financial backing (how much they make from sponsors, prize money, or an outside job), athletic performance and goals, and social media followers, and it asks for a personal statement and a letter of recommendation.

Schwarzman’s grantees don’t always appear to need the money, which leads to occasional grumbling from athletes who aren’t getting funding. They see the rich getting richer—and wish those top athletes wouldn’t apply for grants. 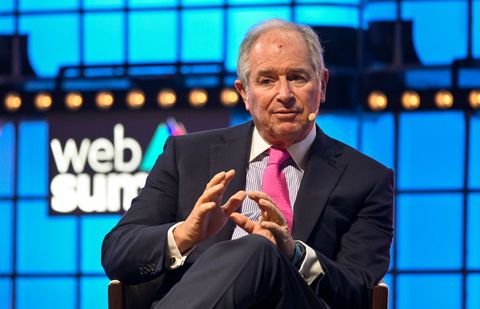 Thanks to a $2.65 million donation from Stephen Schwarzman, CEO of Blackstone, 100 track and field athletes received grants in July from the USATF Foundation.
Horacio Villalobos//Getty Images

Hurdler Grant Holloway, for instance, is already an Olympic medalist and thought to be well supported by Adidas. Sprinter Abby Steiner recently signed a deal with Puma that was rumored to be worth millions of dollars. Both were recipients of $30,000 grants last month.

According to a press release that announced the grants, although financial need may be considered, the primary criteria for selecting grantees is “the athlete’s potential to medal at the next Olympic Games or World Championships.”

Financial need comes into play more for the $8,000 USATF Foundation grants. Recent grantees include Marybeth Sant-Price, who runs the 100 meters and is currently unsponsored, and Olympic steeplechaser Val Constein, who works full-time in customer service and also does not have a sponsor.

Even those who are critical of the grants are happy the money is disbursed independently of USATF, the governing body, which has frustrated struggling athletes for years with its lavish pay packages to Siegel and other executives.

A cushion for the stars

And even for the best track and field athletes, lasting financial security can be hard to attain. Injuries cut careers short; sponsors can be fickle. Some contracts have reduction clauses that cut athletes’ pay due to injury or under performance.

Trevor Bassitt spoke to reporters at the World Athletics Championships on July 19, after he had just finished third in the 400-meter hurdles in 47.39. In addition to the bronze medal, he earned $22,000 in prize money.

The day before, he had learned he was receiving a $30,000 Schwarzman grant, bringing his two-day total to $52,000. Not NFL money, certainly, but something to live on.

Basssitt recently finished his collegiate eligibility at Division II Ashland University in Ashland, Ohio, and he’s been living cheaply with roommates on money made from summer jobs during college. As he spoke to reporters, his agent, Karen Locke, stood close by. At the time, he hadn’t signed a shoe deal yet, but his bronze medal will likely help him earn a sponsorship worth more than six figures annually for a few years.

While he’s getting his post-collegiate training situation and financial life sorted out, the USATF Foundation grant provides a cushion.

“That was a fantastic thing to wake up to yesterday,” Bassitt said. “I’m so thankful. That’s an incredible foundation. It alleviates a lot of the financial burden for us. [The money] will allow me to focus a lot more on my training.”

Sarah Lorge Butler is a writer and editor living in Eugene, Oregon, and her stories about the sport, its trends, and fascinating individuals have appeared in Runner’s World since 2005. She is the author of two popular fitness books, Run Your Butt Off! and Walk Your Butt Off!

What We Know About the Huntington Scandal

How to Watch the 2022 Chicago Marathon

Will Emily Sisson Go for U.S. Record in Chicago?

Eliza Fletcher Died from Gunshot Wound to the Head