Elites and everyday enthusiasts stepped up to the starting line on Sunday, October 2 for the 42nd edition of the London Marathon. Great Britain’s biggest road race featured thrilling races and memorable highlights. Check out our round up of the action below.

→ Sign up for Runner’s World+ to keep up with the latest pro racing news! 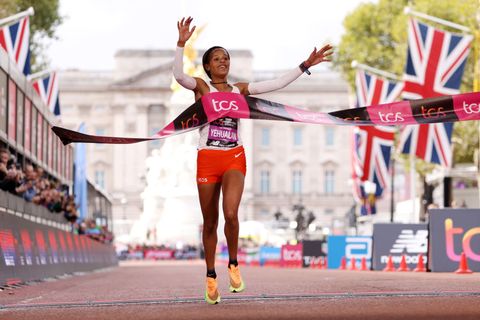 Six months after running the fastest debut marathon ever, Yalemzerf Yehualaw won the London Marathon in 2:17:26. Despite taking a hard fall in the second half of the race, the Ethiopian fought her way back to claim her first World Marathon Major title.

The elite women got off to a blazing start with a pack of eight—including Jepkosgei, Yehualaw, Megertu, Bekere, Korir, Melly, Asefa Kebede, and Hiwot Gebrekidan—running between 16:01 and 16:02 for the first 5K, on pace for a 2:15 finish. The pace slowed through 10K and 15K, but the group was still within striking distance of the women’s-only world record (2:17:01) set by Mary Keitany at the 2017 London Marathon.

At halfway, the record was looking less likely. The group came through between 1:08:46 and 1:08:47 with the same podium contenders leading the charge.

After the half marathon split, the top group began to shrink slightly when the pace picked up. Led by Yehualaw, the top seven runners hit 25K in 1:21:29 by covering the last 5K in 16:04, the fastest since the early miles.

Around 1:45 into the race, Yehualaw took a hard fall on the course but was able to recover and rejoined the lead group.

The first big break in the race happened just before 35K when Jepkosgei, Korir, Megertu, and Yehualaw surged ahead, leaving Kebede, Melly, and Bekere behind.

The second breakaway followed just after the 2-hour mark when Yehualaw made a decisive move to the front and dropped the remaining contenders. Her victory was all but sealed around mile 24 when the broadcasters announced she split a jaw-dropping 4:43 for the mile.

Yehualaw maintained her sizeable lead all the way through the finish line, notching a winning time of 2:17:26. The victory is just her second 26.2 after making a historic debut at the Hamburg Marathon, where she ran 2:17:23 in April. 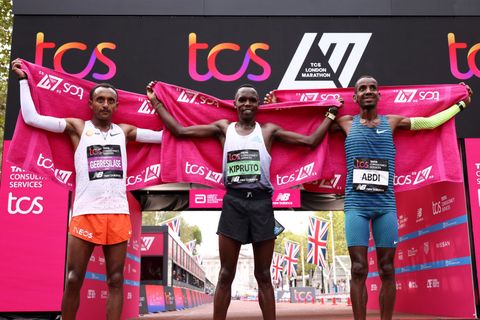 Amos Kipruto pulled away from a deep field to win the men’s elite division of the London Marathon. The Kenyan ran 2:04:39 after breaking the race open at mile 24, which he covered in 4:36. Leul Gebresilase of Ethiopia earned silver in 2:05:12, and Belgian Bashir Abdi ran 2:05:19 for third.

The pacers were prescribed 1:01:45 pace to help the men crack the 2:04 barrier. Unfortunately, the lead pack of seven only managed 1:02:14. It was all about racing from there.

Kipruto kept on the gas, pressing hard over mile 24 and cementing his impending victory. Gebresilase outdueled Abdi for second.

While the crowd was watching the front of the race develop, 40-year-old Bekele held on to pick up two places over the final miles, finishing fifth in 2:05:53. His time broke the previous masters record of 2:06:25 set by Ayad Lamdassem of Spain earlier this year.

How Did American Elites Fare?

In the women’s race, Marci Klimek finished 11th in 2:37:56. The 2020 U.S. Olympic Marathon Trials finisher was the first American to reach the finish line after running the majority of the race solo in a separate women’s start.

Andrew McCann was the top American in the men’s elite race. Just a few months after running a new personal best of 2:17:35 at Grandma’s Marathon, McCann finished 17th in 2:21:39 on Sunday.

It’s become an expectation for folks to attempt Guinness World Records at World Major Marathons, and the London Marathon was no different. A whopping 18 records were bettered over 26.2 miles—some of them pretty zany.

For example, the group of Tristan Clark, Freddie Flanagan, Freddie Wright, John Lavelle, George Peirson, and Hugh Williams cracked the record for fastest marathon in a six-person costume—a basket of vegetables—with their 4:25:12 finishing time. Jeremie Maillard ran the entire race in a unicorn suit, complete with rubber mask, in a record 3:26:38. Not to be outdone, Kristina Beadle bested the female mythical creature category record with her 3:43:41. 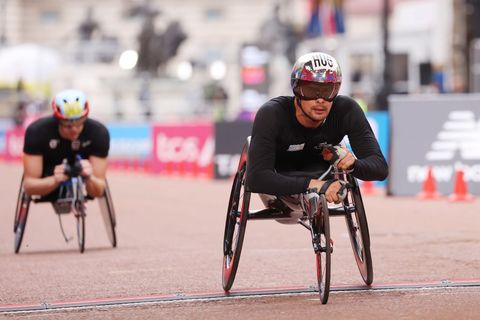 In a duel that marathon fans are used to seeing, wheelchair elites Marcel Hug of Switzerland and Daniel Romanchuk of the U.S. broke away from the pack and built a three-minute lead by the 25K mark. Hug took the brunt of the pace until the final turn, where Romanchuk shot to the inside to attempt a pass. But Hug was too strong for the American; he powered away to break the tape in a new course record time of 1:24:38. Romanchuk finished under the previous record as well with his time of 1:24:40. Great Britain’s hometown favorite and eight-time London Marathon champion Dave Weir took the bronze position in 1:30:40. 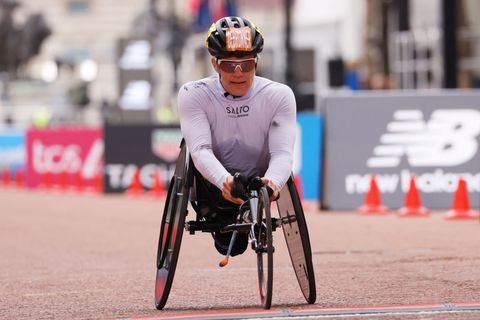 Just a week ago, Catherine Debrunner of Switzerland was atop the podium at the Berlin Marathon—her first race at the distance. She doubled down on that effort with another victory in London, despite a crash in the middle stages in the race. She won by nearly four minutes, besting the course record with her 1:38:24 time. Susannah Scaroni of the U.S. took second place in 1:42:21, and Eden Rainbow-Cooper of Great Britain took third in 1:47:27.

At 65 years old, the 1984 Olympic marathon champion is still crushing 26.2. On her way to achieving all six stars in the Abbott World Marathon Majors series, Benoit-Samuelson won the women's 65-69 age group by running 3:20:20 in London. The next closest finisher was almost eight minutes behind her.

Taylor Dutch is a writer and editor living in Austin, Texas, and a former NCAA track athlete who specializes in fitness, wellness, and endurance sports coverage. Her work has appeared in Runner’s World, SELF, Bicycling, Outside, and Podium Runner.