The women’s race kicked off at a fast pace, led O’Keeffe and Emily Durgin. By the halfway point, the lead pack dwindled down to six athletes. By the eighth mile, O’Keeffe was clear of the field. Her time of 51:24 knocked 20 seconds off of Molly Huddle’s previous record from 2015. Annie Frisbie finished second, and Durgin took third. 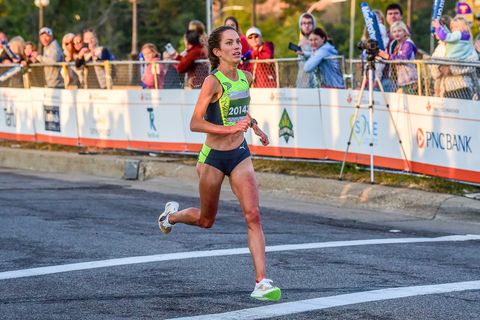 On the men’s side, a large pack of athletes bolted off the line and held together until the four miles. By the halfway mark, only eight athletes remained, including Biya Simbassa, Sam Chelanga, Shadrack Kipchirchir, and Hillary Bor. Bor and Chelanga began to separate from that group, cementing themselves as the clear favorites by the eighth mile. In the end, Bor outlasted Chelanga to win in 46:06. Chelanga ran 46:14 for second, and Simbassa clocked 46:29 for third. Bor’s time broke the course record, set by Kipchirchir in 2018, by 28 seconds.

→ Sign up for Runner’s World+ to keep up with all of the latest marathon news!

Both O’Keeffe and Bor earned $12,000 for winning, but there was an added challenge. The women were given a five minute and 57 second head start before the men’s race started. Whoever crossed the finish line first, whether a male or female athlete, earned a $10,000 bonus. O’Keeffe came out on top.

The USATF 10-Mile Road Championships awarded prize money to the top-10 athletes in each field. The prize structure is as follows:

The next race in the USATF road running championship circuit is the USATF 5K Championships. The races take place on November 5, during New York City Marathon Weekend.

Ashton Kutcher Is Training His Kids for a 5K

How Much You Slow Down in a Hot Race