The Runner’s World staff knows that many people at this time of year will get into running to lose weight. There’s nothing wrong with that if you keep a healthy mindset in place as you approach your relationship with running. And we hope that you’ll eventually fall as madly in love with running as we all have, regardless of what the scale says.

We know it’s important to cover weight loss because we want to guide runners along their health journeys, and we try to approach these topics with science- and expert-backed information. We try to be precise with the language and messaging we use in these stories. We avoid using vanity terms (think: slim down, bulk up, toned, trim, slender, chiseled, cut, ripped) as these words perpetuate the unhealthy concept of using exercise as a means to an end.

Last week, right after the holidays, we messed up. An Instagram post showed our Runner-In-Chief, Jeff Dengate, on a treadmill with a holiday treat in hand, with text that said it would take 30 minutes of running to burn off one cookie.

But burning off “bad” foods is not a message we stand behind. And thankfully, many of our readers made sure we knew that we missed the mark.

One of those followers was Dorothy Beal.

I know Beal first as a friend—someone who encourages me to practice self-love and who gives me courage in my running and in life. I know her second as a dedicated runner, and third as a positive force on Instagram.

Beal, a 37-year-old mother of three from Leesburg, Virginia, is also a RRCA and USATF Level 1 run coach, a 38-time marathoner, and a body-positive activist. But before she found running, she said she was not a picture of health. And she beat herself up about her weight and body.

“I started running in 2000 to lose weight,” she says. “By the time I did my first half in 2002, it became glaringly obvious that my body didn’t look like a stereotypical runner’s. Even at my lightest, I felt different than the images I saw in the media.”

Through her own transformation, she realized that the weight she did lose was just an added bonus to the feelings she felt after finishing a race.

“Still, I found that I was always getting comments about my body even though I was far from overweight,” she says. “People would say, ‘I thought you had to be really thin to run a marathon.’ I figured a lot of women experienced this.”

She started @IHaveaRunnersBody, an account that welcomes people of all body types into our running community. Her message? If you run, you have a runner’s body. Through this account and her personal platform, @mileposts, Beal has amassed more than 90,000 total Instagram followers and has become a voice against the idealization of the perfect body type.

The comments she left on the cookie video told us editors to wake TF up.

Along with Beal, many others spoke out about our flubbed post last week, and we want you to know we are listening. We took down the original post and apologized to our followers.

This conversation is important, and with the exception of this mistake, we have been trying and will continue to try to change the narrative. We connected with Beal to drill into the topic further.

Ali Nolan: Tell me why the post pissed you off.

Dorothy Beal: Well, I wasn’t angry, but I was disappointed. And I was sad.

This time of year, one day it’s “Treat yourself, eat the cookie!” Then New Year’s rolls around, and it’s like “Oh shit, you overindulged, you’re a fatso, you better start working out like a maniac.” I just didn’t want to believe that this type of message was still an issue in the running community, but of course it is.

It’s just a marketing message that’s been used over and over. Maybe it works for companies, but at what cost?

I look at things, not only from my perspective, but from the perspective of a mom. Would I want my children, whether they are elementary-aged or college-aged, seeing posts that essentially tell them that they need to earn a cookie through running? For so many people, it doesn’t click that language like this is unhealthy and promotes disordered thinking and eating.

When I was scrolling past the post, I didn’t get upset initially. Then I realized, coming back to it, that I had a blind spot. I realized it said something about my acceptance of food shaming. Do you think that’s a normal reaction?

I think we’ve become so accustomed to seeing all this stuff that it’s just normal to scroll on by. It’s a terrible mentality.

I know that some people do genuinely want to lose weight and need to for their health, and running is a great way to do that. I’m not going to be the person who says we should never talk about food. But I think if we’re going to talk about food and weight, it needs to not be in a disordered way. Thinking that you have to earn food or burn food is disordered.

So I think the fitness industry has a choice to make. You can either try to promote your product or brand or supplement because you’re trying to make a difference and you want people to embrace health. Or you can tout weight loss and, in the process, make people feel bad about themselves.

I think it starts with us calling B.S. on the language that’s harmful. But brands have to listen. Especially in running, it must be a collaborative thing.

We know that the practice of tracking and restricting calories is an antiquated approach that fails to look at the whole picture. And we know that telling people to “work off” food is triggering for those who struggle with disordered eating. Especially around the holidays. The guilt and shame are just unbearable, right?

Yup. It steals the joy. The food that you eat on a holiday is supposed to be associated with good feelings, with cultural traditions, family time. And to wake up the next day and have an external source say, well now you better work all that off, it’s not fair. Too many people already have that shaming voice inside them.

Especially in running, where it is so easy to put your self-worth into numbers, whether that’s time or weight. We’ve made some progress, but clearly there is more work to be done.

When I first started running, I read that old book by Jim Fixx, The Complete Book of Running. There’s an actual chapter that’s called “Getting Fit: The Mathematics of Looking Like a Runner.”

And the quote that’s always stayed with me, was this: “Unless you’re already fairly lean, the weight you lose won’t be enough to make you a really good runner. Good runners are startlingly thin.”

Right? So yeah, that’s old material [1977]. But you figure there are a lot of runners who grew up with that mentality and some who still believe in that.

I think the only way to change that conversation is to constantly say hey, running is about empowerment and being healthy, let’s stop trying to reach a goal weight.

Unfortunately, I believe this mindset is still alive and well in running. I say this as an editor in the fitness game, a runner, and as a woman who struggles constantly with frustrating thoughts about food.

Let me complicate this a little more. For me, a typical thought pattern on any given day might be: Oh, I just ate ice cream. Now I have to run 5 miles to burn it off. Then add in a new layer of guilt and shame because there is this new thought that’s saying, “You shouldn’t be thinking like that! You should be running for joy and empowerment! Not to burn off ice cream!”

For me, what helps is yelling back at those thoughts. Saying: None of this is healthy!

It takes daily work to pull yourself back up. You need to identify it as an irrational thought from the get-go. So, when your mind tries to tell you to burn off “bad food,” remind yourself that this is not a rational thought. You have to tell yourself this without shame, without judgement. Just be objective. It gets easier.

I have a friend who has said, “Why don’t we just stop talking about bodies? We talk so much about our body types, maybe if we just ignored this topic, no one will be self-conscious, no one would care about what body you have.” Is this something you’ve thought about?

Well that’s a problematic solution. It’s almost like saying you’re colorblind, you don’t look at people’s skin. If you are colorblind, or blind to other people’s bodies, then you have another issue. Because that means that you’re not paying attention to the plight of other humans.

In 15 years, when I tell people that I used to have a platform called “I have a runner’s body,” I truly hope they laugh at me. I hope they wonder why people paid attention to runners’ bodies. I hope it’s as ridiculous as the notion that women couldn’t run marathons.

In order for that to happen, we have to change the narrative concerning weight. But see, we’re still struggling.

It’s not just girls and women, either. We both know men in running who struggle with eating disorders. For men, there might be even more pressure to make race weight. And they are conditioned to think that they’re not supposed to struggle with self-image—that’s the stigma.

I guess I can appreciate when people think I’m being too overbearing about the topic of healthy self-image, but usually if someone thinks that I’m too focused on it, they haven’t ever had to deal with it themselves. All I ask is that people have a greater understanding, a deeper empathy for those of us who do have to deal with negative feelings around weight and food.

When I hear my daughter comparing her weight to another girl’s, and when I see a post telling us to burn off our cookies, I know that bodies have to be talked about.

If you, or someone you love, needs support with an eating disorder please reach out here. Help is available.

This interview has been edited for concision and clarity. 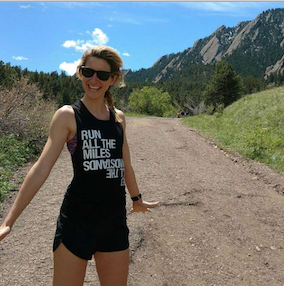 What Athletes Should Know About Ferritin Levels

The 6 Best Mediterranean Cookbooks of 2022