In 2016, Gwen Jorgensen claimed America’s first Olympic gold in the triathlon. Instead of becoming the first female triathlete to defend her title at Tokyo 2020, she set an even more audacious goal: gold in the marathon.

Jorgensen has been training with famed Bowerman Track Club coach Jerry Schumacher, who many will know as the coach of 2018 New York Marathon third-place finisher Shalane Flanagan and Amy Cragg, who is the 2017 world championships bronze medalist in the marathon.

So far on the track and the roads, things have been positive. Jorgensen ran a sub-32 minute 10K PR in March, and also ran the U.S. Half Marathon Championships in Pittsburgh in May, finishing with a time of 1:10:58 for fourth place. During her build-up to the Chicago Marathon (which unfortunately didn’t go as planned—she had a fever), Jorgensen told Runner’s World why she’s captivated by the race, and how she plans to become the world’s best—again.

Why leave the top of the triathlon world for the marathon?

I do not believe I have reached my potential in running. In triathlon, my running kept improving, making me curious as to my limit. I think my performance in the triathlon showcased that I could run hard around the two-hour mark in an endurance race. I would always wonder “What if?” if I didn’t attempt this feat.

What intrigues you about the marathon?

To me, the marathon is the most iconic Olympic event. Everyone knows and respects that distance. 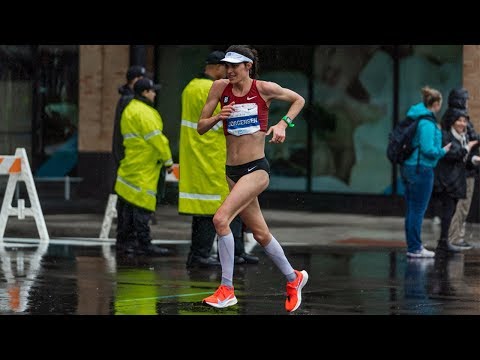 How does racing a marathon compare mentally and tactically to racing a triathlon?

In a triathlon, you have to be ready for anything at any moment—like changing ocean currents and bike crashes. The marathon will be a mental beast in a different way. You’re doing the same exact thing for over 26 miles. You have to remain focused throughout the boredom, and push through extraordinary pain of using the same muscles mile after mile.

What’s been the biggest physical challenge to taking on the marathon as a former triathlete?

Staying injury-free. Before each run I spend up to 45 minutes on prehab and stretching. I also do one hour of activation drills and strength work like eccentric calf raises to keep my Achilles strong. And every week I see a massage therapist, acupuncturist, physiotherapist, active release therapist, and pelvic-floor therapist.

What have you learned by training with Shalane Flanagan and Amy Cragg?

You have to callus the body to the miles, and then the speed will come back. I have struggled to maintain my speed with increased mileage [about 100 miles during a big week]. It’s not just my legs, I also practice being bored and embracing the pain during key sessions. After taking time off for my pregnancy in 2017, I forgot how to hurt. I have really had to push myself in races and training to revel the suffering.

Riley Missel is an experienced road racer, mountain biker, national champion on the track, and a former Bicycling editor. She is a USA Cycling-certified Level 1 coach, a loud and very stoked Spin instructor, and she will definitely stop the ride to pet that dog.

Running Connects Me to My Community

What You Need to Know About Kipchoge’ Bottle Man

From Runner's World for Under Armour

Marathon Breakthrough: Why I Only Run Twice a Week

Lucky Westlake on Running and Mountaineering

You Are a Runner. Period.

The Best Running Music to Add to Your Playlist

This Runner and Dietitian Wants You to Fuel Up

Running Helped Me Bring People Together