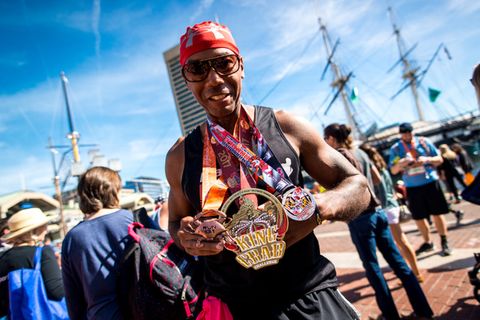 The Philadelphia Marathon commemorated its 25th running in November with a display at the expo showing how things about the race had changed over the years: the bibs, the route, the commemorative shirts.

By far the biggest transformation was the medals.

They’ve grown from half-dollar-sized pendants to more than 4-inch-diameter, 3-D replicas of the Liberty Bell that ring, authentic right down to the inscription—“Proclaim Liberty Throughout All the Land Unto All the Inhabitants thereof”—and the famous crack.

So popular is this medal that after the marathon dropped it for a year in 2016, the number of runners who signed up for the race declined, said Leo Dignam, executive director of the Philadelphia Marathon.

“There is a medal race in the business,” said Dignam, who brought back the Liberty Bell in 2017. “Runners are coming to expect something special, and if they don’t get it, that’s okay. But if they do, that’s better.”

Increasingly elaborate medals have come to symbolize more than finishers’ pride in their performance. They exemplify the spiraling competition for registrations at a time when the number of races is rising faster than the number of runners.

“You’re looking at market forces driving this,” said Phil Stewart, a race director and president of the industry association Road Race Management. “Races are in a more crowded environment and looking for ways to differentiate themselves. And one of the ways they can do that is to offer bigger medals.”

The result is medals the size of small pizzas, with spinning parts, secret compartments, LED lights, stained-glass window-style translucent fills and glow-in-the-dark glitter, or that fit together into even bigger medals or include wine toppers or bottle openers or their own “kickstand”-style mounts. At least two manufacturers are developing medals that play sound effects.

“The better the bling, the more runners you attract.”

“There are so many more races now, and to get that runner to run that race is a lot more difficult,” said Chris Seiler, cofounder and president of the manufacturing company Always Advancing, which makes the Philly medals and a medal for the Beach Cities Challenge series in Southern California—a shark whose jaw swings open, showing artwork of waves and a surfboard. “Medals are one thing races can use to attract runners, because you’re going to get this one-of-a-kind piece.”

Road races now hold unveilings of their medals, announce them in elaborate videos, and design them far in advance to use in recruiting efforts. So important have these mementoes become that some races have lobbied successfully to have the first Sunday in March become “National Finisher’s Medal Day,” beginning this year.

“We encourage races to design the next year’s medal and show it at the expo,” said Dan Ashworth, president and CEO of industry behemoth Ashworth Awards. “I may be biased because I make them, but I think that the medal is the most important piece of marketing. You almost have to tag it as part of your marketing budget. It’s that important.”

The Little Rock Marathon has created a following for its medals, each year’s with a different theme and introduced four months before the race—precisely the time when runners start their training. Last year’s had a medieval motif, with an emerald-eyed dragon and a built-in bottle opener. The large keepsake was 8.5 inches tall and weighed 2.5 pounds; this year’s is an even heavier 3 pounds and has a space theme, with glow-in-the-dark features and a spinning alien.

A race series in Maryland and Delaware has built its marketing, in part, around what it calls its Big Freakin’ Deal medal, which goes to runners who complete races of any distance at each of this spring’s Baltimore 10-Miler, Frederick Running Festival, and Delaware Running Festival. The races and the name of the series spell out “BFD,” and that’s what the medal says, too, with two spinning parts.

“The better the bling, the more runners you attract,” said Brie Burdych, merchandise manager for running at series organizer Corrigan Sports.“Once people have their calendar lined up for the year, they’re done. If we put this extra medal out there and grab them early, we figure they’ll sign up for our races rather than somebody else’s.”

Another race series in Rhode Island uses a similar idea to promote its five half marathons. It has separate medals for each one with magnets to connect them like puzzle pieces into a single grand 7-inch medallion.

“We found that it made more people want to do all five races,” said Susan Rancourt, co-owner of organizer Rhode Races & Events. “The medal is a huge part of that—probably the biggest part of it.”

After the tradition started, Rancourt said, “Runners were posting pictures of the medal and sharing it, and as the year progressed, more and more people asked us, ‘How do I get that?’”

Not everyone is thrilled about this.

“I liked the purity of that magical time in running where we ran not for what we got, but for what we gave,” said Gary Allen, race director of the MDI and Millinocket marathons in Maine, who remembered running the Boston Marathon before it started awarding medals to more than just the top 100 finishers—a change a Boston Athletic Association spokesman said was made in 1983.

“People now expect these medals, and the medal suppliers are constantly making more and more intricate designs with lights and bells and moving parts,” Allen said. “Then the sport, to pay for these ever ramped-up symbols, needs to keep raising entry fees. Somebody has to pay for them. I don’t know where the end is.”

Stewart’s own race, the Cherry Blossom Ten Mile Run, gives participants the option of choosing a medal for $15 above the comparatively low entry fee. About a third buy one, Stewart said.

But Burdych said runners surveyed consistently shows that “one of the most important things to runners is the bling.”

Even Allen once slammed another race for producing a medal that looked similar to the MDI’s distinctive lobster-claw award. As for the cost, said Philadelphia’s Dignam—medals wholesale for from $1 to $10 apiece.

“You can always fix that problem with volume. If your medal’s going to cost 50 cents more but you get 1,000 extra runners at $150 apiece, it pays for itself,” he said.

Dignam said that, during his recruiting season, runners often ask about the finisher medal. He laughed at the thought that runners may be put off by the fact that medals keep getting bigger and more elaborate.

This content is created and maintained by a third party, and imported onto this page to help users provide their email addresses. You may be able to find more information about this and similar content at piano.io
Advertisement - Continue Reading Below
More From Runners’ Stories
This Magician’s Latest Trick is Marathoning
Dad Runs 4:32 Mile While Pushing Son in Stroller
Advertisement - Continue Reading Below
Miler Eric Holt Doesn’t Want to Have Any Regrets
Shadrack Kipchirchir to Run Debut Marathon in NYC
This Runner Logged the Most Miles in Central Park
Gaining Inspiration From Mothers at Worlds
This Nurse is Running NYC for March for Babies
Vacation Running Playlist to Enjoy Time-Off Runs
The Best Running Music to Add to Your Playlist
This Runner Clocks Miles to Make Water Accessible