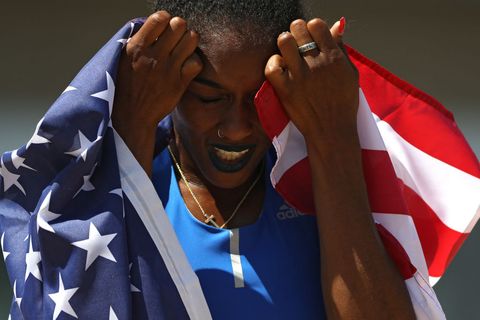 It started out like a normal practice, though her calves felt a bit tight in warm-up. As Christina Clemons cleared a hurdle working on a new drill, she felt something hit the back of her leg. She heard “a huge, loud pop.” It was 2013, her first professional season. The 11-time All-American and two-time NCAA champion thought that she had been hit by an errant shot put. Her coach accused her of breaking the hurdle.

They were both wrong. When Clemons shifted her weight, she collapsed to the ground. She had ruptured her right achilles tendon and wouldn’t race again for over a year.

Her full return came slowly, but Clemons never lost faith. In 2017, she was named to the U.S. World Championships team. She’s running PRs again. She is currently ranked fifth in the world in the 100-meter hurdles. Newlywed Clemons, formerly Manning, is ready to declare her comeback complete.

Runner’s World: When did you realize the injury was serious?

Christina Clemons: [At first] there was no pain whatsoever. I just had nothing to hold me up. The doctor said I had to wait at least a year before I could start to do anything. It takes eight to twelve months just for the tendon to get healthy again. It was my first injury ever. I mean, I never even had a charley horse before, so I had no idea. I was thinking I’d come right back and be fine. My head coach’s eyes swelled up and she started to cry, and I’m like, “Whoa, what’s going on?” I mean, this is the type of injury that causes people to retire.

What causes that kind of injury?

[Doctors] said that it could have been just from my calves being tight, simple as that. I never had any symptoms—which is a scary thing because that happens to a lot of athletes, they never have symptoms.

It was quite challenging and sometimes frustrating. After surgery, I was in a boot for six weeks, and I couldn’t walk. That was tough—when it was time for me [to try to walk again], it felt foreign to my body. I was just thinking, Wow... If I can’t even walk the way I’m supposed to, how the heck am I supposed to run? How am I supposed to go over a hurdle? I did therapy five days a week, and it took me about nine months before I was able to even jog, and over a year for me to run. During therapy I had to get the strength back in my calf, soleus, foot and ankle, so I did a lot of calf raises, used the Stairmaster forwards and backwards, did towel grabs with my toes, one-leg balances, hip and core work, lots of calf raises, and other exercises. I even used an underwater treadmill with resistance, which was one of the toughest exercises for me at the time.

You mentioned that you didn’t think this would have happened if there wasn’t a bigger reason for it. Do you have any idea what that reason was?

If it wasn’t for this injury, I don’t ever think I would have truly been able to reach my potential because I didn’t work hard enough for it. I was lazy. I was super talented, so I was able to accomplish things without really putting the work in. [The injury] really caused me to be a fighter and have the mindset of a champion. I changed coaches, I took better care of my body. It taught me to accept where I am in life and not to compare. That was hard for me when I was seeing the girls I used to run with do so well while I was just trying to heal.

You talk often about your faith. How big of an impact do you think that had on your comeback?

There’s absolutely no way I could have made my comeback without my faith. It was because of my faith in who God is, not who I am, that caused me to push forward. If I didn’t have faith, I would have solely been depending on myself—and it’s extremely hard to rely on your own feelings through a tough time. Things get confusing and very hard, but because I had something that I truly believed to fall back on, I was able to persevere.

At what point did you feel like you had completed your comeback?

Definitely the 2017 season. I was healthy—it was my first fully healthy year since I ruptured, and I was stronger and faster than ever. My training was going really great and I was like, “This year is gonna be my year. We have Worlds this year and I’m gonna make that team.” [Ed: She did indeed make the team and went on to place fifth at Worlds.]

Do you think you have reached your potential now?

No I definitely don’t.

There’s not many events in the US where almost five lanes can make a team, but us, the 100-meter hurdlers, we are dominant. I’m sure you watched the 2016 Olympics—the women swept. We talk about it all the time, our Trials are harder than the Olympics themselves.

I believe I can be the world record holder, indoor and outdoor, in the hurdles. Olympic champion, world champion—I believe that I can be the best hurdler who has ever ran. It’s big to say, but it’s truly what I believe in my heart.

Clemon’s Tips for those attempting their own comeback from injury:
1.Stay active. Regardless of your injury, be sure you are always doing something to keep moving, even just walking. It doesn’t have to be strenuous.
2. Let go of your expectations. When you’re dealing with a new injury—or even a recurring one—forget about what you think should be happening and just let it be. Expectations can lead to disappointment and confusion, and there’s no need to add to your trauma.
3. Learn the difference between pain and stretch. Feeling a stretch at your injury site is okay, and most of the time it’s a good thing—however, if your injury is a strain, do not stretch for the first couple of days.