It’s been exciting to see the boundaries of track and field being pushed along over the decades. We’ve seen healthy chunks of time lopped off world records and once-impossible barriers smashed across events.

On the one hand, that progress is to be expected. Records are made to be broken, so athletes specifically and intentionally strive for them. Also, there’s now more training knowledge, a wider array of people participating in the sport, better competition surfaces, more shoe technology, better nutrition, and evolved pacing strategies. They’ve all helped to inch along ever-better performances that eventually reach amazing crescendos like sub-4:00, sub-2:00, or, for women, sub-30:00 or sub-9:00. (Perhaps those last two aren’t immediately obvious as the 10K and steeplechase. Why don’t we women have barriers that need no introduction?)

There is, of course, another variable. The shadowy reality of doping is mysterious in the size of its scope and influence in a given field. It’s there, but who? And when, and how much did it help? (A purist may judge the other advancements along a sliding scale of ethics, but I think we’re on the same page regarding doping being full-on cheating.)

How do we deal with the cognitive dissonance of knowing doping is behind some performances, but not knowing which ones or ultimately what’s really possible?

To me, as a fan and participant, that’s the most frustrating part of the issue. We don’t really know where the current bar of excellence should be for a given event. I’m so curious about what’s really possible for a person, and it’s just not something I can accurately know, even from inside the event.

The Water Bottle Is Half Full

But I’m still here in it and here for it. Ultimately, there’s still more to cheer for than to be disappointed by in the sport. That’s what keeps me engaged. As for how and what needs to be done to tackle doping, that problem is a whole ’nother article/manifesto! (The abridged version is: More, now.) While doing something about the issue is urgent and necessary, I don’t want to lose sight of the part of the sport that makes working toward fixing it worth the effort. There are things to feel good about. 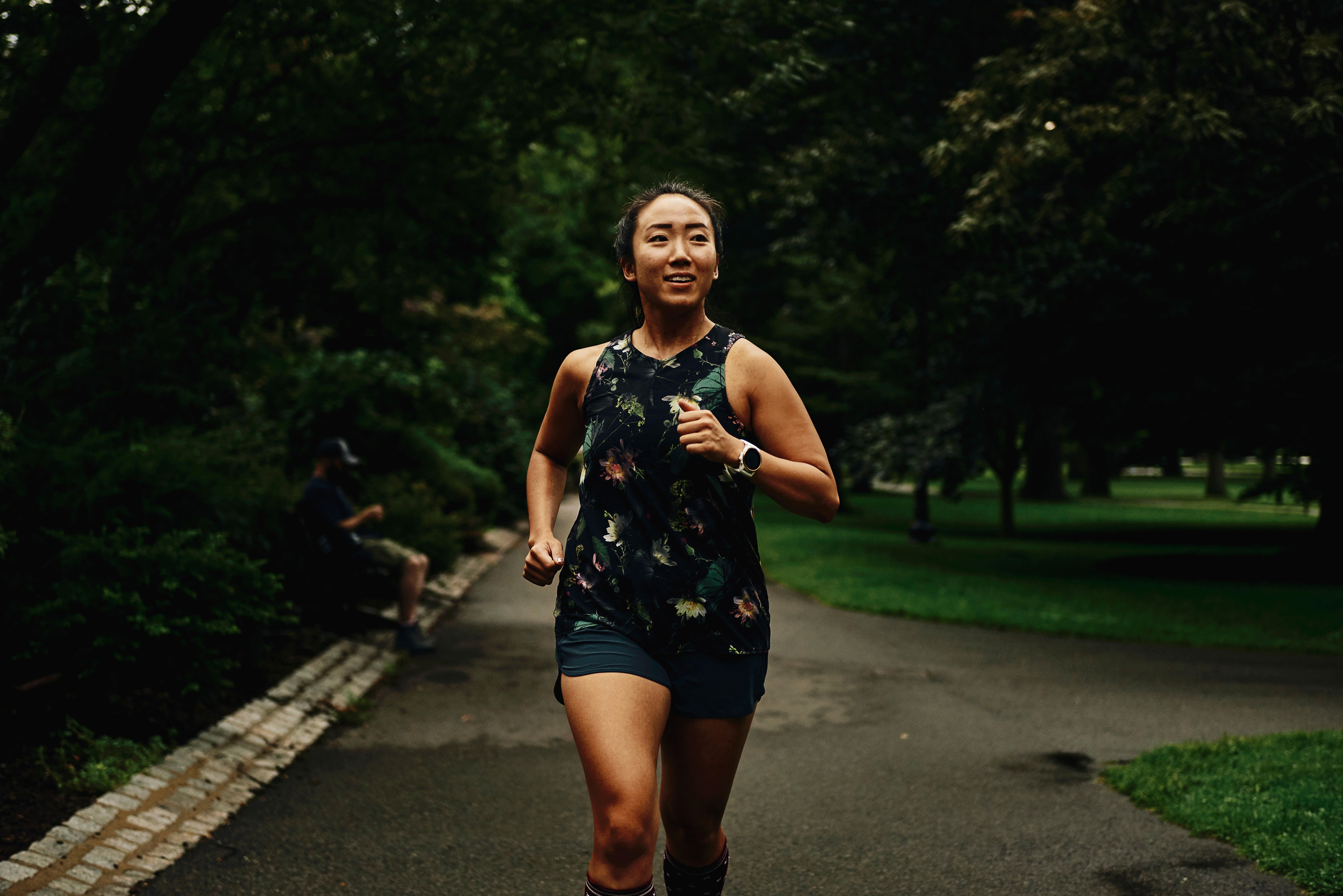 First, not everyone at the top is doping. While I don’t know much outside my own circle, I do know it’s not true that all elites are dopers. Are too many top runners doping? Yes. But there are clean, amazing athletes you can feel good about cheering for, and some of them even land on the podium. The sad part is they get there likely far fewer times than they should. Even sadder, some don’t ever make it to that spotlight, when they probably should have. That’s part of what makes a lot of fans and athletes alike lose hope. While I do have to work at keeping bitterness away, these probabilities make me want to clean the fields up even more.

The Broken Record of Chasing Records

There are some objectives that I think are driving doping in the sport. Of course, there’s money, but I think there’s also a hyper-focus on World Major Marathon wins, championship dominance, and world records. There’s so much more than just these things to care about as an athlete and fan alike.

Records are important and inspiring—heck I’ve hung my career on versions of them—but it seems like a few meet directors at the top are assuming that a world record has to be the goal at every big race outside of a championship. There have been quite a few times when I’ve shown up to an international track or road race and noticed the managers and organizers feverishly plotting for rabbits to hit world-record splits; meanwhile, the actual athlete is giving an incredulous look or a shake of the head. The wind could be whistling, or it could be 90 degrees. Record chases are forced sometimes to the point where some athletes don’t run as fast as they could have if they would negative-split and race for the win.

It seems like certain organizers view racing as a zero-sum game. They seem to project what they think fans need to see to be impressed. Without doping our way to superhuman levels, we still have exciting head-to-head races among rivals, tactically exciting finishes, and watching personal favorite athletes in action. (Maybe they’re from your university or hometown or country, or you just like their uniform color.)

Watching people do what they do best, and execute what they spend hours practicing, has always been interesting. Excellence is interesting, and there are a lot of excellent athletes out there, not just one or three or the one who does the impossible. There are inspiring stories throughout the results. There are personal journeys on the line. I’d argue a lot of people love a close race, or a generally fast time, or just watching athletes pour all of themselves into a performance and end up where they end up, even if it’s on their knees. That’s my favorite part to watch, and as an experience sometimes that’s the only thing keeping my head above water in these kinds of fields.

Another thing to be excited about in the sport is that women’s running is finally benefiting from higher participation numbers. We’re seeing more depth across the world and new names breaking into the spotlight. It’s crazy to think the steeplechase, for example, has been an Olympic event for only three Games now. The current and potential stars coming from that event are so exciting—what would they be running otherwise? New players in the game are always a good thing. There’s still even more untapped potential in certain countries that don’t put resources into the sport.

“Actions have to be taken to fix problems that could become catastrophic.”

Another thing I get excited about are historically challenging courses. They can act as equalizers in a race, and athletes almost need extra expertise to run them well. It was really rewarding to see Des Linden conquer the Boston Marathon field and course (and conditions!) after seven years of experience. I also love the World Cross Country Championships, where most runners collapse at the finish after navigating the terrain, regardless of whether they win or end up 40th. It’s an event to behold regardless of who is winning or what splits they hit.

The NCAA Cross Country Championships are similarly riveting. There’s a lot of heart, and the team aspect is deep and genuine because they’ve trained together for years (although the NCAA is likely a lot cleaner than the pros, which maybe colors my view of the race). The Ekiden races have a similar vibe, and I hope they’re embraced by more countries. Many of these races have their own draw, as a cultural experience. I’m always going to be excited about the New York City Marathon the way someone might always tune in to the Tour de France. You get excited just hearing the news choppers and watching the energy flow through the roads.

We Must Tend Our Gardens

Although doping mars the sport, running maintains its beauty to me as a fan and competitor. I’ll still spend my energy participating in it and uplifting the good parts. There still feels space for me there, and I am still inspired by good and real things that remain in it.

That space is narrowing, though. It feels like I’m looking at a beautiful park with some hidden piles of trash and rogue litter tumbling around. I see that it’s still worth protecting and preserving, that it’s still something you want to save and share with everyone. Like the overwhelming amount of other things going on right now, actions have to be taken to fix problems that could become catastrophic. We can’t keep avoiding the tire heap in the bushes and kicking cans down the road or to the side of the path. Eventually it will become too much. Eventually it will be more landfill than retreat, and the green fields that have yielded values, lessons, and inspiration won’t get enough light.

I’m just here to say it’s worth it. After I watch a race, It still inspires me to go try my best rather than throw in the towel. Buds of hope still sprout underfoot. 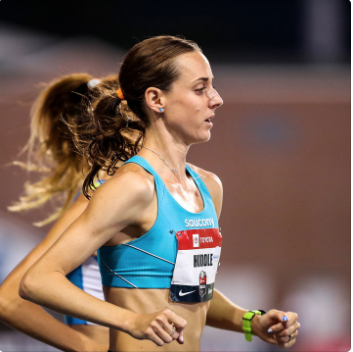 Molly Huddle is a two-time Olympian who holds the American record at 10,000 meters. She placed fourth at the 2018 New York City Marathon in a personal best of 2:26:44.