Every January, runners flock to Disney World in Orlando, Florida, to participate in the Walt Disney World Marathon weekend, which offers a 5K, 10K, half marathon, and marathon. Some brave souls attempt Goofy’s Race and a Half Challenge, running both the half and full marathon. Some braver souls, including Brittany Charboneau of Denver, Colorado, attempt the Dopey Challenge: all four races—5K, 10K, half marathon, and marathon—on consecutive days.

However, Charboneau—also known as ‘The Funny Runner’—didn’t just complete all four races, from January 5 through 9, this year. The 33-year-old made history by becoming the first person to win them all. To top it off? She raced while also dressed in costume.

Charboneau, already an accomplished runner, finished 13th at the 2020 Olympic Marathon Trials. She’s run some of the fastest-known times on famous Colorado trail routes, such as the Maroon Bells Four Pass Loop and Mt. Bierstadt, and she has eyes on earning a spot on the United States national mountain running team this year.

So why did she decide to open her 2022 racing season at Disney World?

Rewind to the 2021 Boston Marathon, when a back injury forced Charboneau to pull out mid-race. Disappointed, she wanted to use that leftover fitness, but didn’t want to add stress by chasing a specific time.

Charboneau ran three Walt Disney World Marathon weekend races in 2018. So, she thought to herself, why not try for four in 2022—this time in costume? (Charboneau is no stranger to dressing in costume, as she comes from a theater and performing arts background. Check out Charboneau’s website for pictures of her dressed as Cyndi Lauper for an OtterBox sales conference.)

“I just really wanted to go back to somewhere that genuinely brought me happiness,” she told Runner’s World.

Charboneau and her coach came up with a special training plan to prepare for the challenge. She ran tempo workouts on Mondays, which could be 15 to 18 miles. Then, she did a long run on Tuesdays, with a workout built in to get used to running on tired legs.

To prepare to run in costume, she tested different pieces once a week on an easy or steady run. “Could this wig stay on as I’m going faster?” she thought. “Or does this vest work as I’m running this effort?” She decided on a different costume for each race, around which she thematically planned her race strategy. 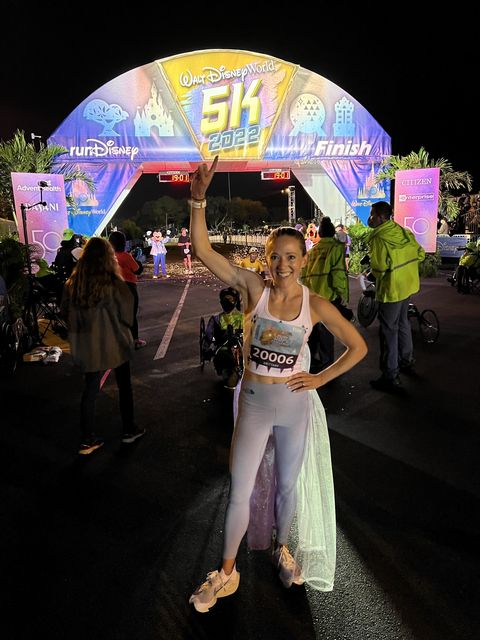 Charboneau dressed as Elsa from Frozen.
Courtesy of Brittany Charboneau

For the 5K on January 6, Charboneau dressed up as the ice queen Elsa from Frozen. She broke up the race into four sections, all themed around her costume.

Charboneau crossed the line to win in 17:36, and described the race as a blur; as a marathoner, she’s used to racing for closer to three hours. “I felt like it was a hard effort, but I wasn’t going crazy,” she said.

Post-race, she recovered with protein drinks and squeezable apple sauce, before touring Disney’s properties. While some might want to stay inside and off their feet, for Charboneau, touring Disney World was the perfect way to keep her from focusing on the pressure of each upcoming race day.

“I tried to keep in mind that I’m on a trip,” she said. “I want to soak up the experience.”

Charboneau dressed as Bing Bong from Inside Out.
Courtesy of Brittany Charboneau

For the 10K on January 7, Charboneau dressed as Bing Bong, the imaginary friend character from Inside Out. She chunked out her race just as she did the previous day, by attaching them to Bing Bong's traits.

Charboneau doesn’t normally run the 10K, calling it her “least favorite” distance. As such, Bing Bong was the right character for the job, as he allowed her to emulate “playful” and “imaginative” energy. She ran conservatively for the win, finishing in 36:36.

Soreness crept in throughout the rest of the day, but not so much that it prevented her from meeting up with friends to enjoy the rest of her day. 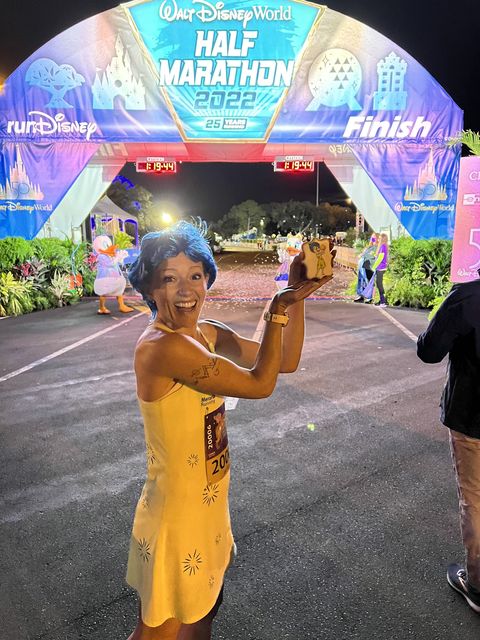 Charboneau dressed as Joy from Inside Out.
Courtesy of Brittany Charboneau

Charboneau embraced the spirit of Inside Out’s Joy for the half marathon. Armed with her wig and dress, she aimed to “be the joy for everyone.” Each mile, she reminded herself of a different person on her support team, but saved the last 0.1 for herself.

That mindset brought her another win in 1:19:18. Three races down, one to go.

Charboneau started to feel the fatigue of back-to-back-to-back races in her body. Naturally, after three wins in a row, there was a little pressure to win the fourth race. She decided to lay low the day before and visit friends who lived nearby. They helped her remain grounded ahead of her last race.

“Even though all of this hype and buzz is going on around all these races, don’t forget that you just love to run… it was the last little reminder I needed.” 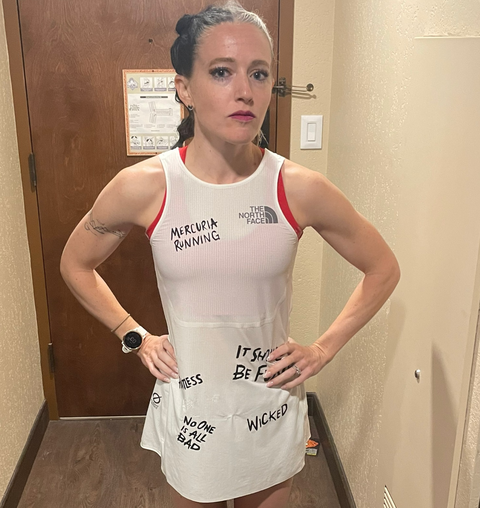 Charboneau dressed as Cruella from 101 Dalmatians.
Courtesy of Brittany Charboneau

After the gun went off, Charboneau felt tired, from the many miles on her legs and not sleeping well the night before, so she settled into third place. She stayed confident, hanging back until mile 20, when she moved into first place.

“That last 10K … was really where I channeled that Cruella energy,” she said. “I really had to dig into that confidence because it was starting to get really, really, hard… I was having to battle mentally and physically.”

When Charboneau crossed the line in 2:45:15 to take the win, she felt a wave of pride rush through her. She completed her goal, but more importantly, she did it her way. More than four race wins, it was a mental triumph for Charboneau.

“Sometimes, I think there’s a disconnect between getting to run really fast, or being an elite, and all of a sudden the fun goes away,” she said. “I want to make sure that people know that you can still have big goals; you can still run fast. But you can do it in a playful way, as long as it’s genuine and authentic to you.”