As the old adage goes, it takes a running club to raise a drag queen—or perhaps that only applies to New York City’s Shuga Cain.

The 44-year-old appeared on season 11 of RuPaul’s Drag Race—a reality competition show on VH1 where contestants try to win the title of America’s Next Drag Superstar—and sashayed away in seventh place. During her time on the show, she lip-synced for her life in the show’s first-ever six-way battle, impersonated Charo in Snatch Game to rave reviews from the judges, and made the crowd go wild with a series of wardrobe reveals at the finale. What you may not know, however, is that Shuga Cain, the drag persona of Jesus Martinez, started in her running club, Front Runners New York.

While you could say that Shuga Cain has always been a runner, Martinez has certainly not. Growing up, they quit their soccer team “because they ran too much.” That changed when they met their now fiancé Gilbert Gaona, and the pair moved to New York City from California. Gaona was an avid runner and joined Front Runners, a running club for LGBTQ+ people and allies, upon arrival. Martinez tagged along soon after.

“It was just an amazing group, and especially moving to New York City as an adult, it’s harder to meet people. We didn’t really go to bars and things like that,” Shuga Cain told Runner’s World. “We started going to the fun runs and signing up for races, and I started meeting a lot of really cool people.”

Like many LGBTQ+ organizations, Front Runners parades in the New York City Pride March every year. “I don’t know where this idea came from,” Shuga Cain said, “But I had this idea that I wanted to go in drag.” They spent hours researching padding, wigs, makeup, shoes, and all the other pieces need for drag; watching YouTube tutorials; and reading articles online. Somewhere amid the chaos, Shuga Cain was born.

For Shuga Cain’s first drag look, she wanted something that matched the Front Runners colors: orange, blue, and white. “I didn’t want to stand out. I wanted to feel like I was a part of the group.” Because it was hot, she opted for minimal padding, which is typically used to create wide hips, and wore a white tennis skirt, navy blue leotard, and orange bracelets. “It wasn’t anything super glamorous,” she said.

When the day finally arrived, she was as excited as she was terrified. “I didn’t know what the response was going to be,” she said. She was worried her Front Runners club mates would be confused about the choice to come in drag. 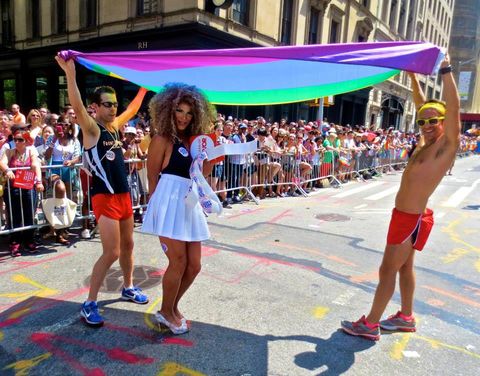 Shuga Cain in drag for the New York City Pride March in 2014.
Courtesy of Shuga Cain

“I remember walking up cause we had to walk far to get to where the staging area was. I remember being terrified, and thinking ‘I’m in my late thirties, why am I nervous about this?’” she said. “When I got there, the entire club just lost their minds. They were so excited. It was the most amazing thing.” She marched the entire parade route in heels—and couldn’t run for a week afterwards.

After Shuga Cain’s initial success, she spent several more years as a Front Runners queen. The organization throws a talent show every fall. With a master’s degree in opera, Martinez decided to enter as Shuga Cain, putting together a performance of Kinky Boots’s “Land of Lola” (redubbed “Land of Shuga”) with a few other members as backup dancers.

Eventually, a friend from California who managed several drag queens told Shuga Cain about a drag competition in Times Square, in a random attic above a restaurant. While she felt nervous, her running club gave her the confidence to compete.

“The Front Runners came out,” she said. “The audience was packed. The support has always been amazing.”

All the while, Shuga Cain kept running with Front Runners. Her rise as a drag queen even inspired other runners to take up drag. Several times, the team entered all-drag queen teams for Cherry Tree Ten Miler Relay, run in Brooklyn every winter. 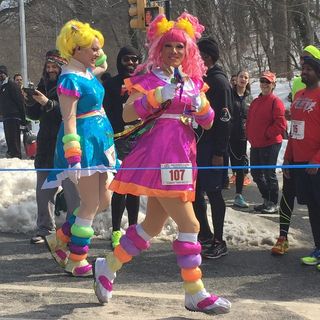 “[Running in drag] during the winter is lovely. We had all the padding, all the tights, the wig. We were warm.” Running in drag the summer though? Not so lovely: “You’re sweating your makeup off, but it’s about the visibility and the fun.”

Shuga Cain would go on to compete on RuPaul’s Drag Race, tour the country, host a cooking mini-series called Gimme Some Shuga, release music, and star in her own music video—but all the while she kept running. She completed a half Ironman, finished the Boston Marathon and New York City Marathon, and competed in the Gay Games, a worldwide sporting event held to promote LGBTQ+ athletes. She’s currently plotting a fall race this year with her fiancé. They enjoy picking destination races, so they can go on vacation too.

Even with her international success, Shuga Cain is still an active Front Runner and can be spotted running races around New York or in the cheer zone shouting for her teammates. 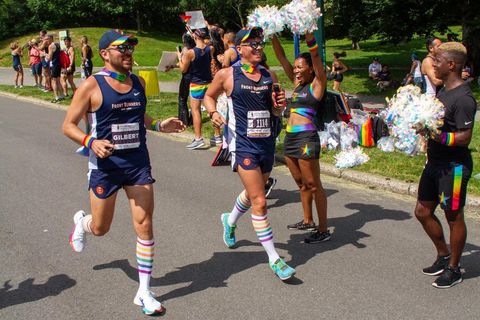 “It doesn’t matter where you come from, what you’re doing, or how you identify. They are just welcoming. We may not be widely accepted in other facets of the world, but when you get us all together, we take care of our own,” she said. “It was their support in the beginning that really gave me the confidence to do this. I definitely wouldn’t be where I am today without them.”

Matthew Huff is a freelance writer and runner, and he is the author of MARATHONER: What to Expect When Training for and Running a Marathon, published by Rizzoli Publications. His writing has appeared in Runner's World and BuzzFeed among others, and he is the cohost of “P.S. You’re Wrong: A Pop Culture Podcast.” Originally from Michigan, he now lives and runs in New York City, where he is pursuing a career as an expert chicken tender taster.

All the Side Effects You Experience from Running

Can a New Pillow Improve Sleep and Stop Snoring?

Lucky Westlake on Running and Mountaineering

You Are a Runner. Period.

Why Do My Feet Go Numb on the Run?