A few weeks ago, when I was 34 weeks pregnant, I joined my running group for a track workout. As I’ve learned throughout my pregnancy, some days I feel great while running and other days are extremely difficult. But I’ve tried to be understanding and patient with my body no matter how it feels. On this day, I happened to feel amazing.

For each 400-meter repeat, done relay-style with a partner, the competitive side of me really came out. With my belly peeking out of my singlet, I kicked past runners on the homestretch, smiling each time I reached the hand-off zone. I was still running within my body’s limits and having a blast doing it.

A few days later, my body took a dramatic turn. When I tried to go for an easy run, cramps shot down my lower legs and groin area. I tried walking for a few minutes, hoping the cramps would subside, but they didn’t. I tried using positive self-talk to process the moment but when my husband met me on the trail, I couldn’t contain my disappointment any longer, and I broke down.

I know the most important thing is that my baby girl is growing healthy inside me, but I couldn’t help wondering how it’s possible for my body to feel like a stranger in this moment after all these years spent pushing myself in the sport. I use running as a way to care for my mental health, and I find so much joy in the community it has brought me. I’m fortunate to exercise this far into my pregnancy but at that moment, I didn’t want to say goodbye even for a short period of time.

About a week later, after several days of feeling let down, I watched elite runners set world records and win medals at the World Athletics Championships in Eugene, Oregon, and one athlete’s performance in particular resonated with me on a personal level. 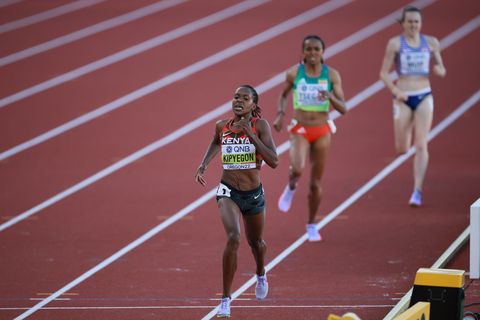 On July 18, Faith Kipyegon, known among her competitors as “the sniper,” claimed her second world championship gold medal in the women’s 1500 meters—her sixth global championship medal. In the process, the two-time Olympic champion for Kenya became the first woman to win four global 1500-meter titles.

She’s a dominant force on the track, but the part of Kipyegon’s story that impresses me the most is that she took 22 months of maternity leave (including 12 months without running) around the birth of her daughter, Alyn, in 2018. When she started running again, she returned to the top of the sport faster than ever before. As she shared in a 2021 interview with Runner’s World, Kipyegon doubted that she could recapture her same form, but she found that giving birth to Alyn actually helped her reach new levels on and off the track.

With the help of an extensive support team in Eldoret, Kenya (including her coach Patrick Sang, trainers, and doctors), Kipyegon took her time getting back into shape, monitored her health throughout the comeback process, improved her endurance, and found extra motivation in her daughter.

“Many athletes think it is something that will end your career, but I see it’s just the start of your career,” she said. “I can say it’s helped me. When you see your child running around, it gives you motivation. I became stronger and stronger.” 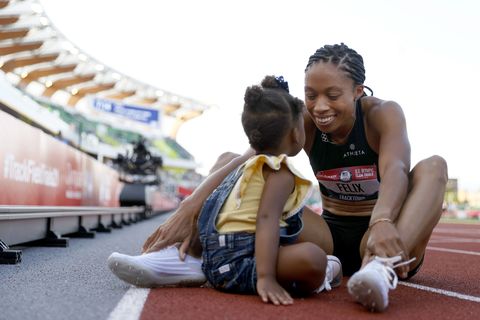 I’m obviously not out here to win a world championship, but as a fellow runner, Kipyegon’s words resonated with me at this point in my pregnancy. To know that even Olympic champions struggle with doubt, that it’s okay to take an extended break, and that running can take exciting new forms postpartum, are all messages I need to hear right now. More importantly, I want to be stronger for my daughter.

I can’t wait to show her the many examples of runners who have reached new heights and supported fellow athletes’ careers after becoming mothers. I’ll tell her about Kipyegon and Olympians Allyson Felix and Alysia Montaño, who have encouraged more maternity protections for female runners through advocacy efforts. At this year’s USATF Outdoor Championships, Felix partnered with &Mother, a nonprofit co-founded by Montaño, to bring child care to the meet for athletes, coaches, and staff for the first time ever. Felix, her sponsor Athleta, and the Women’s Sports Foundation also created a childcare fund.

Last week in Eugene, Felix earned her 19th world championship medal to go with 11 Olympic medals by contributing to Team USA’s bronze in the mixed 4x400-meter relay. As always, Felix’s daughter, Camryn cheered for her mom on the sidelines. “She has been my reason. She has given me courage and strength,” Felix wrote on Instagram. “No medal or performance in this world could ever compare. I’m proud of my accomplishments on the track, but I’m most thankful for what I’ve been able to contribute to off the track and that is because of this little girl and her generation.”

I hope to follow in these athletes’ footsteps by working towards building a better future for my daughter and her generation. Through running, I want to show her the power of working towards a goal and the importance of supporting others along the way. When I return to running as a mom, she’ll be my biggest motivator.

Taylor Dutch is a writer and editor living in Austin, Texas, and a former NCAA track athlete who specializes in fitness, wellness, and endurance sports coverage. Her work has appeared in Runner’s World, SELF, Bicycling, Outside, and Podium Runner.

Heartbreak for Grant Fisher as Medals Elude Him

What You Missed on the Track Sunday Night

What You Missed on the Track Saturday Night

Noah Lyles Is Having the Time of His Life

What You Missed on the Track Friday Night

Can Sydney McLaughlin Do It Again?

5 Things You Should Know About Michael Norman

How to Handle Hot Races, According to Pro Runners

What You Missed on the Track Thursday Night