A grinning man in a neon yellow cap runs steadily through Central Park. He eases up Cat Hill towards Engineers Gate, looking like he’s just getting started. There are a handful of runners on either side and trailing behind him, slightly reminiscent of the Monument Valley scene in Forrest Gump.

“Ladies and gentlemen, Oz Pearlman!” shouts a man with a megaphone. He holds a poster board with 10 tally marks on it. He raises his megaphone and howls into it again, a few decibels higher: “Ten laps in Central Park so far—he’s going for 100 miles!”

The Man in the Yellow Hat is Pearlman. He’d been running continuous 6.2-mile laps since 6 a.m. that morning, with at least one person (and up to a few dozen people) running beside him. He wasn’t just doing it for the glory and the record books, though he did wear two watches to make sure it counted.He was trying to raise money for a charity that delivers food, water, and hygiene kits, and offers other humanitarian aid to Ukraine.

His original idea was fairly straightforward: “I’m going to run 100 miles and we're gonna raise at least a hundred grand.” Pearlman, a seasoned marathoner and ultramarathoner, is a professional mentalist. Between outrageous running endeavors and time at home with his young family in New York, he makes his living by traveling all over the world performing mind-reading shows. Wherever he travels—be it Iceland, Las Vegas, or Sydney—Pearlman runs. But for him, the greatest city in the world to run is his home, New York City.

When Pearlman got a call from his agent last spring about a show opportunity he couldn’t pass up, he was ecstatic, and then immediately crushed when he realized it was the same day as his next big 100-mile race. He had to cancel his registration.

Pearlman didn’t want to waste his fitness, so he decided to do something different. Within hours, Pearlman came up with a better idea. He would run the distance in his favorite place, Central Park, and do it for charity. He would run it two weeks from then, on the first day his calendar wasn’t booked for a show. A friend told him about the record he could break, and that was just icing on the cake for ultra-competitive Pearlman.

The night before the run, Pearlman flew in from a show in California and his head hit the pillow at midnight. At 5:30 a.m. the next morning, he “lubed up the feet, threw on some sunblock and did it.”

Not that it was total cake—by lap 12, he was battling pain, stomach aches and queasiness, and mild misery, just like anyone would. With many hours to go, Pearlman turned his mentalist powers on himself to keep going.

As a man who has amazed millions by manipulating thoughts onstage, he had plenty of practice directing his own mind where he wanted it to go. “I tell myself ‘You feel great right now’, even though my body is telling me otherwise, and my foot hurts,” said Pearlman. “It's almost like self-hypnosis. I will change my own mind from within.”

He didn’t stop to rest once. 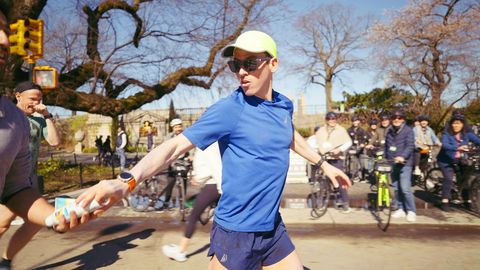 Around lap 14, Pearlman changed his strategy. Being surrounded by supporters and backed by this cause had boosted him so much, he was on track to run his personal best 100-mile time. He ran his fastest miles of the day over the next 3 laps, peaking with a 6:42 on mile 84.

Every person who ran beside him donated, which he credits deeply with his motivation. “If they give me all that belief, I'm not gonna get rid of it because my legs are tired or because my stomach hurts. That's ridiculous,” said Pearlman. 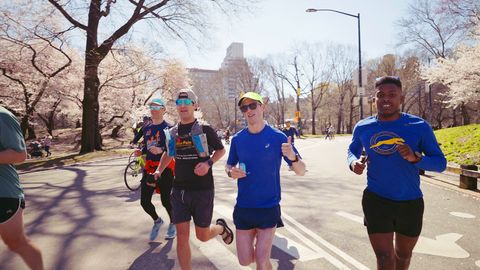 At the 100 mile mark, Pearlman blasted across the line shouting, his fists in the air. “I wish I could bottle that feeling and keep it,” he said. One lap later, the record was officially broken by four hours.

Delirious, he crossed his finish line and fell into his wife's arms, and then hugged it out with the megaphone man, who had been there with him since 5:30 that morning.

It was after sunset. The crowd held up the Ukrainian flag, whooping their loudest. Pearlman stumbled through an exhausted, heartfelt thank you, and added the final tally onto the poster board. 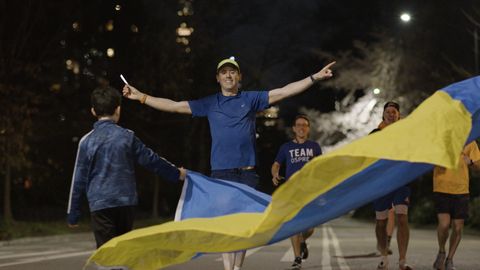 After about three minutes, Pearlman realized he wasn’t done. “We're making this record harder for the next person that wants to break it,” he decided. So the mentalist ran two more painful laps in the dark for a grand total of 19.

Pearlman ran 17 hours that day, and he had raised $116,600 for Save the Children of Ukraine. Not to mention, he set a personal record time for running 100 miles (14:35), and inspired hundreds of fans and runners across the world.

“This was bigger than just running around Central Park on a beautiful day,” said Pearlman. “It wasn’t [even about] the running. It's that somewhere, someone’s life is being helped in some way because of what we're doing. It was bigger than us.”

Riley Missel is an experienced road racer, mountain biker, national champion on the track, and a former Bicycling editor. She is a USA Cycling-certified Level 1 coach, a loud and very stoked Spin instructor, and she will definitely stop the ride to pet that dog.

Listen to This Chill Playlist During Your Taper

Running Gave This Coach Her Confidence Back

I’ve Run Every Day for 21 Years

The Story Behind Tigist Assefa’s Breakthrough

In Partnership With Lexus

Abuela’s Mantra Got Her Through a Marathon

In Partnership With Lexus

Running Connects Me to My Community

What You Need to Know About Kipchoge’s Bottle Man