If you thought running a 4:32 mile was hard enough, imagine running that same time while pushing a stroller. That’s exactly what Ruben Sança accomplished with his five-year-old son, Greyson, at the High Street Mile in Newburyport, Massachusetts on August 7. The pair unofficially broke the Guinness World Record for the fastest mile pushing a stroller with their time of 4:32.2. (The current official record is 4:41.83, run by Taylor Huseman and his daughter in Irvine, California on March 8, 2022.)

The gun went off at 9 a.m. in blazing 95-degree temperatures. Sança—who resides nearby in Salisbury, Massachusetts—pushed off the line like a bobsledder preparing for an Olympic run.

“[Greyson] is in the 99th percentile for his height [for his age], and he weighs 55 pounds. The stroller that I use is 25 pounds,” Sança told Runner’s World. “When you add that, you have 80 pounds that I'm pushing!” 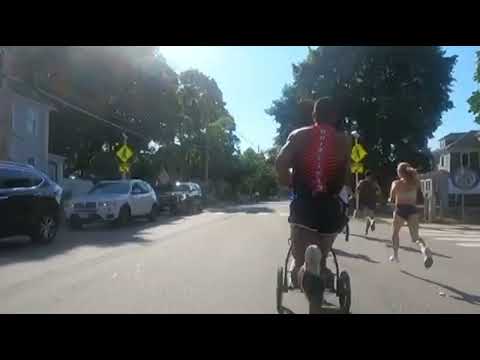 Once he got going down the straight, flat course, Sança gripped the stroller with his right hand, pumped his left arm for forward momentum, and slid to the left side of the stroller to open his stride, keeping one wheel in between his legs. Greyson, capped with a helmet, was strapped in for the ride down High Street.

The situation was pretty routine for Sança and Greyson—though Sança typically ran at a slower pace. The pair often go out for stroller runs together, sometimes up to 12 miles. Initially, the runs were a strategic move to help Greyson nap in the middle of the day. But after awhile, Greyson became more and more excited to go out on the stroller—potentially because of their ice cream and smoothie stops mid-run, but also because of his budding appreciation for the activity.

“He went from falling asleep to asking me to go faster,” Sança said

Eventually, Sança and Greyson closed out a 10-mile run in 5:45 and wondered how fast they could actually run with the stroller. Sança was able to secure a spot in the High Street Mile and sent in paperwork for Guinness ratification.

Not only was Sança sure they’d get the record, but they were in third place at the halfway mark, ahead of many stroller-less runners. But a tweak in Sança’s quad caused them to fade to fifth. Regardless, they broke the Guinness world record time with video proof—Sança’s friend filmed the entire attempt while riding alongside on a bicycle.

Sança was happy with the race, but particularly excited to share the moment with Greyson: “He’s growing up and he's getting this view of like, ‘Hey, fitness is a part of your world.’”

Health and fitness are an important part of the Sança family. Sança is a track & field Olympian and multiple national record for Cape Verde, where he was born and lived until he was 12 years old. His wife, Lauren, played basketball and tennis and runs, too. Sança also works full-time as the Director of Student Life & Well-Being at University of Massachusets Lowell, his alma mater. Greyson has already shown interest in track & field, dabbling in sprinting, throwing, and distance running.

In fact, after seeing other kids running the High Street Mile, Greyson was upset he didn’t run by himself. “He’s very competitive,” Sança said, laughing. 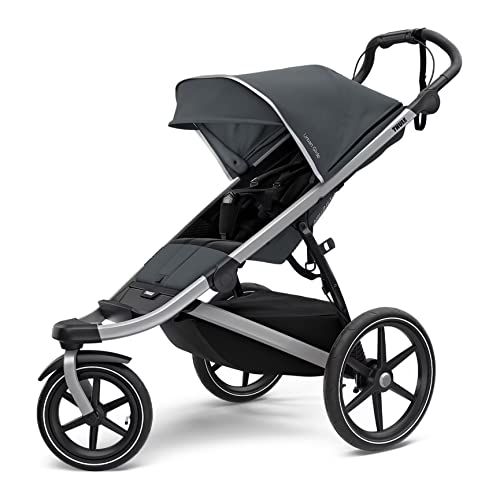 Because the previous record was run on a track, Sança and Greyson’s record might not be officially ratified, even though they posted a much faster time. But as they await Guinness’s response, Sança is confident they could run just as fast, if not faster, on the track—despite the curves: “With the stroller that we use [the original Thule Urban Glide], turning is not a big factor.”

Regardless, Sança and Greyson enjoyed their experience racing together. “For me, it was more about having a challenge and going for it,” he said. “It’s a special moment for both of us, and our family.”

My Kid and I Nearly Got Creamed by a Car

The 10 Best Running Jackets for Kids

6 Kids Designed the Coolest Nikes of the Year

The Morning Mile Gets Kids Running Before School

The Salomon Speedcross J is Playground-Ready

The Nike Future Speed Kids Shoes Are Ready to Fly