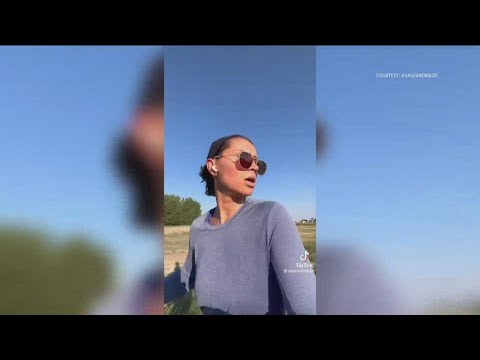 Earlier this week when Samantha MacIntyre started her eight-mile morning run, she did not anticipate it would end with her calling the police with concerns about her safety.

In a TikTok video that has since gone viral, MacIntyre, who lives in Idaho and has nearly 300,000 followers on the platform, documented her run. She checked in after each mile, commenting on topics like the brisk 42 degree day, her Spotify playlist, and excitement about her upcoming half marathon—her second go at 13.1 miles.

But five miles into her run on a rural Idaho road, her lighthearted updates took a different turn.

She said that a man in a red car had driven by her twice. MacIntrye explained that the man’s arm was out of his car window, and he kept looking back at her as he drove by. It made her nervous, but she continued running.

Shortly after, she recognized the same car parked up ahead.

“I do not feel good about this. I have to run by this car to get back to my car though, there’s literally no other way around… It’s just one of those things where it’s like, you don’t think it’s going to happen to you until it happens to you. I don’t want to risk anything,” she said in her video, which has garnered more than 10,000 comments and 7 million views.

As she contemplated her next move, MacIntyre saw the car pulling out. Visibly upset, she decided to cut her run short at 6.22 miles and call her parents to come get her. In the meantime, she asked a neighbor, whose house she passes often on this route, if she could wait in their yard. She also called the police, who were later able to locate the man and confirm he does not have a criminal record.

“For the most part everyone has been super supportive and very nice about the whole situation,” MacIntyre told KTVB. “Thanking me about kind of bringing light to this situation. Which makes me feel better, because it makes me feel a little less like I was overreacting and that other people have been in the same position as me and know how I was feeling.”

MacIntyre did finish that half marathon, appearing on TODAY on September 22 to discuss the encounter. “It was a really big accomplishment that I even got myself to do that half marathon because I really thought I might never run again,” she told TODAY.

After the encounter on the trails, she offered advice to other runners.

“Just please be aware of your surroundings when you are going on runs. Carry protection with you,” she said. “If you have a gut feeling that something doesn’t feel right, please go with that gut feeling. Just be safe. You’d rather be safe than sorry.”

Viewers agreed with her decision, with one commenting: “Eliza was just going for a run in Memphis too. Always trust your gut!”

Eliza Fletcher, a 34-year-old teacher and mother, was forced into an SUV during her morning run on September 2 in Memphis, Tennessee. She was later found dead, and Cleotha Abston was arrested in connection to her kidnapping and faces first-degree murder charges.

In the weeks following her death, runners have banded together to honor Fletcher, whose nickname was “Liza,” by hosting memorial runs throughout the country to “Finish Liza’s Run.” In Memphis, an 8.2-mile run was organized that followed the same path she intended to run on the morning of her abduction.

“It really spooked me because as a fellow runner, I’m like, ‘this could possibly happen to me.’” MacIntyre said on TODAY.

Fletcher’s tale is unfortunately not a new one. The murders of other female runners – including Mollie Tibbetts, Vanessa Marcotte, Karina Vetrano, Alexandra Brueger, and Wendy Karina Martinez – have made national headlines in recent years.

The issue is clear. Now we must work together to ensure women and marginalized groups—like indigenous, LGBTQ+ and BIPOC people—can start each and every run, guaranteed of one thing: that they will safely finish.

Stephanie is a freelance writer and running enthusiast based out of Bethlehem, Pennsylvania, who specializes in writing about health and fitness best practices and covering elite runners and inspirational competitors for publications such as Runner's World, The Guardian, Women’s Running, PodiumRunner, Wingfoot and Competitor Magazines. When she's not writing, you can find her running the trails with her two Vizslas or traveling with her husband to races around the world, constantly on the quest for a personal best