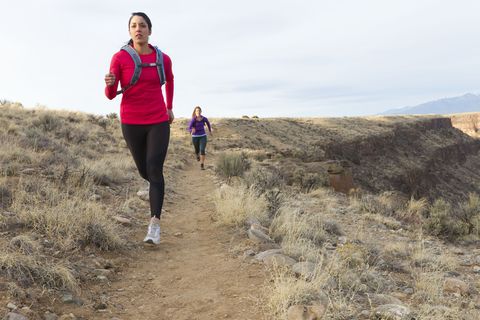 Making the transition from road to trail running can be a humbling experience. One day, you’re racing eight-minute miles in a half-marathon road race, the next, you’re sucking air and averaging a 15-minute mile pace up a ski slope in the mountains. But trail running offers an intriguing challenge for roadies: You can take the mile distance you’re used to, and up the physicality of it tenfold just by adding some climbs and a rougher terrain. “A road is a road is a road,” says Nancy Hobbs, the founder and Executive Director of the American Trail Running Association. “Trails keep changing, from start to finish, from one season to another, which means there’s always a new way to empower yourself.”

And while trail running used to be thought of as more of a fringe sport, more and more people are opting in. Participation increased by nearly 43 percent between 2012 and 2016, according to research done by the Outdoor Foundation, and Hobbs says it’s not just the number of participants that’s growing, but also the number of events offering racing opportunities for trail runners.

There’s also been a shift in mindset. “In the past, when you talked about trail running, people would say, ‘Well, I can’t run that terrain! And if I’m not running every step, then it’s just hiking,’” Hobbs says. Not true: You’ll see people walking at nearly any trail race you do. “You’re probably not going to run the whole thing, but that doesn’t make you any less of a trail runner.”

Racing on trails is hard AF, and you’ll have to push yourself way more than you would on the road. But that’s a good thing! You just need to know what you’re getting into before you take to the trails. “You can’t sign up for a trail race the day before if you’ve never run off-road before,” says Hobbs. “You really need to do some work to check out the course profile and description of the trail. OK, it’s a 5K—but does it have 3,000 feet of climbing? Your perception of a mile changes on a trail.” Follow these tips to tackle that new terrain like a pro.

1. Leave Your Watch at Home

Pace is the biggest difference between a road and a trail race (besides the terrain, of course). “Throw your idea of time out the window,” says Hobbs. “It’s more about the distance than the time.”

In fact, you should go in knowing that you might double your time on the trail versus the road, says Anna Frost, a trail runner and ambassador for Merrell. “You have to change your expectations and expect to go slower,” she says, “otherwise you’ll end up disappointed.”

When you run a trail race, you should think of it as effort-sensitive versus time-sensitive. “You've got to be able to equate effort with the terrain you’re on,” says Ian Torrence, a trail and ultra running coach in Flagstaff, AZ. “On straight, flat terrain, it’s going to be easier to hold a certain pace; if you’re going up a ski slope and trying to maintain a certain pace, you’re going to blow up by the second half of the race,” he says.

2. Train for That Second Half

While you don’t want to stress about a certain time or pace during a trail run, you do want to pace yourself. “It’s so much more important than on the road, because if you go out too hard on an early hill, you’re already exhausted, and you’re going to end up losing time overall,” says Frost. It’s all about eking out your energy across the distance of the race course, so you want to prioritize workouts that make you practice that.

“Fartlek workouts, where you’re running fast from point A to point B and then running at a recovery pace for a few minutes will better you for the trail than looking at your watch and trying to hold a certain pace for a certain distance,” says Torrence. Make sure to run those fartleks over uneven terrain, uphill, and downhill to get a sense of what's sustainable for you.

[Want to start running? The Big Book of Running for Beginners will take you through everything you need to know to get started, step by step]

3. Develop a Different Kind of Strength

Think about running on a road—it’s pretty linear, right? You’re just moving forward, one step at a time, from the start line to the finish line. That means you’re using mostly your quads, glutes, and hamstrings. “But when you’re trail running, there are dips, curves, rocks, roots, and jumps. The trail is all undulating and changing direction, and even if it’s straight, you may have to go side to side because of uneven footing,” Torrence says. That means it’s crucial to strengthen your lateral muscles. “You want to work side lunges, single leg exercises, Russian deadlifts, any sort of squat exercises into your workout routine,” he says.

You also need to be doing really dynamic twisting and balance exercises, says Frost. “Even just standing on a wobble cushion can help develop your balance and strengthen your ankles, which is really important for varying terrain,” she says. Exercises that challenge your fast-twitch muscle fibers and agility, like putting a ladder on the ground and doing lateral speed drills, is really going to help prepare you for the trail, says Torrence.

4. Think Before You Move

Any running can be mindful running, but while the road running allows you to be mindful in a zoning out sort of way, trail running requires you to be totally present. “Trail running is a constant physics problem,” Torrence says. “You're always trying to see what you can get away with. One of the best things is to get used to not looking down, but at least two or three steps ahead of where you actually are.” Trail running can be intimidating for runners who are nervous about possibly tripping over or rolling an ankle over rocks and roots, so it takes practice on the actual terrain you’ll be racing on to get comfortable, says Frost. “You have to learn how to react and respond to the terrain, which requires a looser body and more agility,” she says. “And that only comes with practice.”

5. Practice Picking Up Your Feet

“Shufflers don’t do well on the trails,” Torrence says. “Running with a higher cadence can help.” That means you’re feet will have a faster turnover, or you’ll take more steps per minute. “A lot of people can do that on flat terrain, but when it comes to rougher terrain and weird footing, we get more tentative because we’re scared,” he says. “But staying upright with your feet directly below you is going to give you the best purchase power. Even if you do slip, your other foot will come down pretty quickly to be able to correct any loss in balance.” High knee drills and speed play, like fartleks or downhill sprints, can help you increase your cadence.

Running shoe recs are always tricky because every person’s feet are different. Nearly every major brand makes a trail shoe these days, so head into your local running store to get on a treadmill with a few different pairs. Hobbs recommends looking for a few key things: “You need good gripping ability or traction; you need good breathability; you need support around the midfoot and ankle, so that the shoe's not moving all over the place when you’re on rugged or uneven terrain; and you don’t want to forgo cushioning, because you don’t want anything to come up through your shoe.”

But wear what’s comfortable to you, says Torrence. “A lot of trail shoes are stiffer and bulkier than road shoes, and maybe not as comfortable for some people—and that does take away from the experience,” he says. “It depend on where that race takes place and the conditions of the course, but I run a lot of trail races in my road shoes just because they're lighter and more flexible. You want to feel like you can really move on the trail.”

Trail races tend to be smaller and less competitive than road races, which means you can take the time (literally!) to stop and appreciate your surroundings. “Trail racing—and running—should be a liberating experience,” Frost says. “When I'm on a trail, I’m there to be on the trail, not for the actual distance or the mileage or any of that. It's about appreciating what nature has given us and being grateful for the ability to be able to go out there. There's a lot of people who can't.”

Stop if you need to. Catch your breath. But also stop to enjoy the view. “If you’re just starting out and you look up while you’re running—boom—you’re on the ground,” says Hobbs. “That freaks people out. So stop and look at the trees, the bird flying overhead, whatever.” There’s no harm in taking a break to appreciate nature. “You’re more in tune with the environment and your body on the trail,” says Frost.

Ashley Mateo Ashley Mateo is a writer, editor, and UESCA- and RRCA-certified running coach who has contributed to Runner’s World, Bicycling, Women's Health, Health, Shape, Self, and more.
This content is created and maintained by a third party, and imported onto this page to help users provide their email addresses. You may be able to find more information about this and similar content at piano.io
Advertisement - Continue Reading Below
More From Trail Running
Montrail Makes a Comeback With the Trinity AG
The Best Collapsible Water Bottles for Runners
Advertisement - Continue Reading Below
Altra’s Lone Peak 6 Is the Comfiest Version Yet
The Best Hiking Shoes for Adventures Near and Far
How to Plan a Hut-to-Hut Running Adventure
Winter Trail Running Safety Tips
Nike Pegasus Trail 3: A Smooth Road-Trail Hybrid
The Best Headlamps for Runners
New Release: Allbirds Trail Runner SWT
The Best Running Shoes for Fall 2021