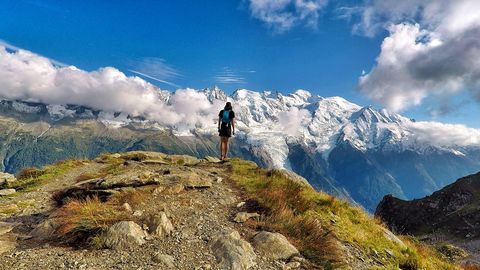 And he (figuratively) goes just as far to make runners laugh and remind them not to take everything so seriously. Videos on his YouTube channel, Mountain Outhouse, include news reports featuring the craziest stuff that happened in running this week, as well as comedic challenges like the Easter Basket Hill Climb where they (yup) consumed the boxes of peeps and contents of plastic eggs on the way up North Mountain in Phoenix. Here’s how he runs steep and gets high.

How did you start running ultramarathons?

Growing up, I was in the Boy Scouts, so I was always backpacking, and then became a runner in high school. In college I did a 25-mile trail run with this local group called Arizona Road Racers, and I fell in love with being outdoors and running all day and getting my legs all scratched up.

You do races that take longer than a day, right?

I’ve attempted the Barkley Marathons (an ultra trail run consisting of five consecutive marathons through the wilderness of Eastern Tennessee) four times. The longest I’ve ever been out on course there is like 56 hours, so that’s about two and a half days.

Have you gotten closer to finishing with each try?

I got the closest the second time I went. I completed four loops, but I didn’t make the cut off to go on the fifth and final loop. And since then I’ve been cut off at three loops, and then two loops in the last two years.

Doesn’t it bother you that it’s nearly impossible to finish?

It’s honestly a big part of the appeal for me. I can be in pretty good shape and finish just about any race I start. But this one, even if I’m in my top shape, I still haven’t been able to finish it. So it forces me to become a better athlete. It combines my skills of orienteering and wilderness survival. You have to think for yourself out there. There aren’t ribbons every tenth of a mile, or aid stations. It’s more self-reliant and I really like that aspect of it.

What is your favorite race?

The Hardrock 100—I’m obsessed with it. First off, it’s stunning up there in the San Juan Mountains. It’s at a really high altitude, the mountains are really steep and spectacular, and it’s a really fun playground. I saw the pictures from the race in 2006 and decided that was what I wanted to do. So I ran my first 100-mile race, Angeles Crest 100 in Southern California, in 2007 just to get a qualifier for the Hardrock. I was able to run the race in 2009. I’ve been going up ever since to be a part of the race.

Your YouTube channel, Mountain Outhouse, is hilarious. What made you want to start that?

I wanted to create something more humorous for the running world because there wasn’t a lot of that out there. The goal is to do something entertaining, and not take ourselves too seriously.

For our very first video, I thought it would be funny to do a challenge race using old drop bags. My race management company, Aravaipa Running, puts on about 30 trail and ultrarunning events each year around the Southwest. Ultramarathoners leave these “drop bags” at aid stations [packed with fuel and extra clothes] and invariably people will leave some behind. So after every race we end up with a pile of these bags. My buddy and I each took four of these two-month-old drop bags and we ran a mile in between [opening each one]. We’d have to eat or drink anything in the bag, apply any body product, and wear any clothing in the bag. It was pretty hilarious.

Jamil Coury and Schuyler Hall during the Holiday Mile challenge, in which they consumed Holiday Nog, peppermint Oreos and Christmas Tree frappuccinos over the course of a mile.
Courtesy Jamil Coury

So what did you find in your bags?

The first one I opened up was Hot Tamales candy, a Coca-Cola and a V-8. And there were so many bags of unlabeled white powder. Both of us threw up at some point, because we were consuming so much sugar and salt, multiple energy drinks…I think my friend ended up putting on like three different long sleeved shirts, and we were doing this in 90 degree Phoenix heat. I had to wear someone else’s shoes, and we both had someone else’s used Body Glide.

What do you pack in your own drop bag?

Besides your typical gels and Clif Shot Bloks, my favorite real food is mashed potatoes. I use that a lot just because it’s really easily digestible and it’s not sweet so it kind of balances everything out. But sometimes it’s a bag of potato chips and a Coke.

All these funny videos on YouTube are created in conjunction with your personal brand, Run Steep Get High. What are you all about?

It’s a lifestyle brand about pushing your limits and getting out there, getting high up on the mountain. It was born out of my time spend in Silverton, Colorado and the San Juan Mountains. It’s the motto of my life: Get out there, get up on a mountain, do something hard. I want to inspire people to elevate their life.

Get out there.
Courtesy Jamil Coury
Riley Missel Riley Missel is an experienced road racer, mountain biker, national champion on the track, and a former Bicycling editor.
This content is created and maintained by a third party, and imported onto this page to help users provide their email addresses. You may be able to find more information about this and similar content at piano.io
Advertisement - Continue Reading Below
More From Trail Running
How to Plan a Hut-to-Hut Running Adventure
Winter Trail Running Safety Tips
Advertisement - Continue Reading Below
The Best Hiking Apps for Trail Runners
How Your Body Handles Trail Versus Road Running
What is Fastpacking?
How to Actually Prep for a Trail Race
Power Hiking While Trail Running Is Totally Okay
A Quick Guide to Surviving Animal Encounters
How Runners Can Celebrate Earth Day Every Day
Expert Advice for Trail Running Newbies
Created for From Robertmtownsend for Created by Robertmtownsend for
Merrell