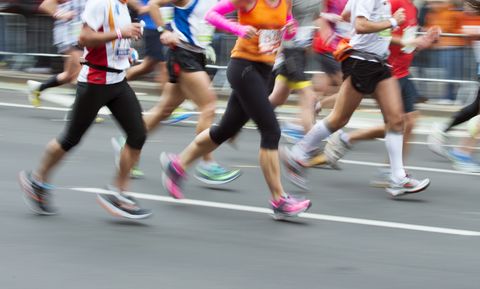 Leo Manzano didn’t make a career running in the springtime. The Mexican-American miler isn’t normally running supersonic times on an indoor track in February (although when he does, he breaks world records). Case in point: Last year, Manzano ran 4:12 at the Millrose Games in February, which isn’t great for an Olympic silver medalist. But six weeks later, at the Texas Relays, he ran 4:02. By mid-May, when the outdoor season hit full swing, he was back to running sub-4-minute miles.

This year, Manzano ran a 1:52 800 meters at the Texas Relays; again, lackluster for a runner of his caliber. In early June, though, he ran a 3:57 mile. His racing habits are undoubtedly part of a 10-year streak of finishing top 3 at the U.S. Championships, ahead of runners who beat him in February and March but didn’t have Manzano’s signature sting when it mattered in late June.

The technique is called “racing yourself into shape,” which means getting into competitions when you’re not fully fit and using a series of tune-up races to sharpen your skills for the goal race. Whether you’re gearing up for a U.S. Championship or a fall marathon, here are four reasons to try racing yourself into peak fitness this year.

In preparation for an upcoming goal race, the difference between running race-pace workouts and actual races is what’s between your ears. “In a race, when people put a bib on, something changes and there’s a new level of accountability, so they’re able to get more out of it,” says Berkeley, California-based running coach Greg McMillan. “They have more targets to bring out the competition than in practice.”

Racing is a stressful thing, especially if you’ve taken the weekend off, traveled across the country, and obsessed over each detail—you don’t want a minor hiccup to become a major mental obstacle as the gun sounds.

“There’s more pressure, more anxiety, and you’re constantly surrounded by runners who are going to push you faster,” says Jason Fitzgerald, a Denver-based running coach. Not only do the other runners help you stay on your game, but the mere fact that you’re racing is mental practice for conquering unforeseen obstacles on the big day.

Just because you spent 20 weeks getting fit doesn’t mean you’ve practiced the most important part: the actual racing. “Racing is a skill, and I think a lot of runners don’t appreciate that,” Fitzgerald says. “They’ll train for five months and run a marathon and they’re not good at it, so they’ll blame it on a lack of fitness when a lot of times, you just need more experience racing.”

Because you’re seldom going all-out in training, racing can help you develop the finer points of pacing, covering moves, and timing your finishing kick.

RELATED: Smash your goals with a Runner’s World Training Plan, designed for any speed and any distance.

Before weekend races were so widely available, early running coaches like Arthur Lydiard used to have their athletes run a series of time trials to gauge the progression of fitness, McMillan notes. “It’s all a feedback loop,” he says. “How did I feel doing that?That should be instructive to the athlete—it should give information going forward about training. Where were the opportunities, where did I slow down?”

It can augment your current training period

Just because you’re in a race doesn’t mean you have to go all-out. You can still test your skill and psychological fortitude (and maybe a new hydration strategy) without burying yourself physically.

“Sometimes you’ll run a half marathon at goal marathon pace to practice fueling and nutrition, and to see how comfortable you are running at goal pace,” McMillan says. “An athlete needs to think about what they can get from a race, what information they can use, because all training is just information to provide guidance on how we’re doing at the things we’re working on.” A miler, for example, might run a 5K to survey his or her endurance or an 800 to assess his or her speed.

A race can also serve as a workout, like using a 5K as a high-end aerobic effort in preparation for a marathon. “You might run the first mile at goal marathon pace, the second mile at tempo pace, and the last mile is maybe 10K or 5K race pace,” Fitzgerald says.

If you’re stepping down in distance to race in the weeks leading up to your goal race, consider adding volume to race-day efforts as your body permits in order to avoid lowering your overall training volume. A marathoner in good fitness might reasonably run a two-mile warmup, race the 5K, and run an easy 10-mile cooldown on the end, Fitzgerald says, adding that mixing up the stimuli is important.

“Whenever you start doing a race and then extra stuff later, it has to be the opposite of what the race was like,” he says. “Let’s say you ran a 5K. You either go super easy on the cooldown, or do a cooldown with some really fast 800s to focus on speed.”

4 Items You Need to Pack for Your Marathon

You can peak several times each year

Any comprehensive training program is periodized, meaning that you go through a series of training stimuli beginning with base-building and aiming with anaerobic sharpening. “The biggest error I see is not clustering your races into a shorter time period,” Fitzgerald says.

In his 16-week training cycles, Fitzgerald has his athletes completely ignore racing for the initial eight-week base-building phase. “I very frequently see 20-week training plans with races in weeks 1, 4, 8, 17, and 20. That’s nonsensical,” Fitzgerald says. The advantage of a periodized training plan is that you reach the competition phase ready to race, so although it’s healthy to do some racing when you’re not completely fit, it’s inadvisable to race throughout the entire training cycle.

That sounds restrictive, but committing to those cycles allows you to have three high-quality peaks each year. “In proper periodization, you have to cluster the races into the competition phases, and use the races to get yourself into shape,” Fitzgerald says. Three times a year, you’ll have run the appropriate tune-up races to prepare for three all-out annual efforts—in the marathon context, that’s a lot.

Using Fitzgerald’s 16-week training cycle, here’s how you can enjoy three preparation races that culminate in a goal race peak:

This content is created and maintained by a third party, and imported onto this page to help users provide their email addresses. You may be able to find more information about this and similar content at piano.io
Advertisement - Continue Reading Below
More From Training
Total-Body Medicine Ball Workout
How to Taper for Your First Half Marathon
Advertisement - Continue Reading Below
6 Keys to Sticking With Difficult Runs
Banded Glute Workout to Fire Up Your Power Muscles
Try These Standing Stretches Before Running
The Best Kayaks for a New Spin on Cross-Training
What Happens When You Run Every Day
Is the 12-3-30 Workout Good for Runners?
5 Tips to Settle Your Stomach on Race Day
Run Commutes Aren’t Just for Getting to Work