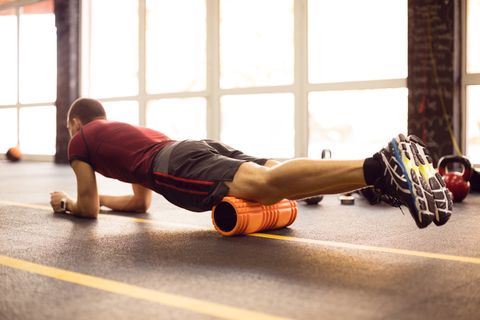 You wake up the morning after a workout and your quads hurt so badly you can barely swing your legs out of bed. Or, on the flip side, the day after an interval session that left you drenched, your muscles feel smooth, refreshed, and completely, well, normal.

What gives? It’s no surprise that you’ll feel sore if you really ramped up the intensity of a workout from what you’re used to, or if you did something completely new. But what about your regular routine? Why are you sore as anything after some workouts, but after others, you barely feel like you did anything? And is there a common thread behind why some leave you aching and others don’t?

As it turns out, postworkout muscle soreness depends on a lot of factors, according to Brad Schoenfeld, Ph.D., C.S.C.S., assistant professor of exercise science and director of the Human Performance Lab at CUNY Lehman College. Here are some reasons why you might feel like you’ve been run over by a truck after some workouts, but not others—and, perhaps more importantly, what you can do to feel better fast.

Aching muscles after a workout, otherwise known as delayed onset muscle soreness (DOMS), are due to micro-tears in your muscles that occur when you put stress on them, says Schoenfeld. Usually, you’ll begin to feel sore 24 to 48 hours after a workout—that’s how long it takes for your body to produce inflammation as a result of that injury, which is responsible for your muscle pain. (These micro-tears must then be repaired in order to make your muscles stronger in the long run.)

What exactly are the factors that go into why you might feel more sore after some workouts than others? We explain three major ones below.

1. How often you train

How sore you get depends on how often you train, according to Schoenfeld.

“In the early stages of training—or if you’re not used to doing something regularly—muscle soreness will be worse than if you do an activity regularly, because your muscles aren’t used to the activity,” he says. In other words, a lack of a certain activity in your routine leads to more muscle micro-tears when you finally do it. (But your muscles will get used to the activity over time and won’t tear as much anymore.)

Overtraining can have the same effect. “If you really overdid it, you could be sore for up to a week,” Schoenfeld says. Again, this is due to the fact that your muscles aren’t used to the duration or intensity of what you did, so they’re more likely to micro-tear as a result.

But because everyone is different, finding your training “sweet spot” might take some trial and error. To avoid super soreness when running, however, building your mileage slowly is your best bet—many runners follow the 10 percent rule, where you up your mileage by no more than 10 percent each week.

2. The types of exercises you’re doing

The micro-tears in your muscles happen whether you do a long run or squat your max weight, but the level of soreness you experience because of these tears depends on the specific type of exercise you’re doing.

Eccentric movements cause more muscle damage and more inflammation as a result, which leads to more muscle soreness, according to Schoenfeld. What even are eccentric movements, you ask? According to a landmark paper published in the British Journal of Sport Medicine in 1995, “eccentric muscle activation is the controlled lengthening of the muscle under tension.” Plain and simple, it’s the “lowering down” part of exercises like leg lifts or bicep curls, for example. is also eccentric, Schoenfeld says, since your muscles are lengthening. This is why you’re more likely to be sore when you run—or hike—down a steep hill as opposed to when you go up one.

Concentric movements, on the other hand, do less damage to your muscles and therefore leave you feeling less sore, Schoenfeld says. Concentric movements are when a muscle shortens. For instance, the “up” motion of a bicep curl. Running uphill is also a concentric movement, since the muscles you’re using shorten as you climb.

[Run faster, stronger, and longer with this 360-degree training program.]

The hormone estrogen helps protect your muscles, according to Schoenfeld, so women—who have higher levels of estrogen—tend to experience less muscle soreness than men do.

And research confirms this. One study in the journal Sports Medicine found that estrogen has “been shown to play a significant role in stimulating muscle repair and regenerative processes.”

So if you’re a guy, you can expect to be a bit more sore from the same (or similar) workouts as your female counterparts, because while men do have some estrogen, they don’t have as much as women do.

What should you do if you’re sore after a workout?

The key to remedying sore muscles is active recovery, according to Schoenfeld. “Don’t plop down on couch and not move,” he says. Just sitting around has negative effect on soreness because you’re not getting any blood flowing to your muscles to help them recover.

Active recovery—like cycling, swimming, yoga, or even walking—helps repair tissue and alleviate soreness. A postworkout massage or foam rolling to relieve sore muscles help, too, according to Schoenfeld.

But if you are ridiculously sore, Schoenfeld cautions you to not work out until your muscles feel a bit better, since you could risk an injury (a larger tear). That doesn’t mean you have to wait until they’re completely better, though—if you’ve improved to the level where you are just mildly or moderately sore, there’s no harm in working those muscles, he says. Just make sure not to overdo it—if you are really sore, doing a shorter or less intense workout might be best in the meantime while your muscles recover.

Danielle Zickl Senior Editor Danielle Zickl for Runner's World and Bicycling.
This content is created and maintained by a third party, and imported onto this page to help users provide their email addresses. You may be able to find more information about this and similar content at piano.io
Advertisement - Continue Reading Below
More From Training
HIIT Cardio Workout to Increase Power
Runners Share Their Best Black Hair Care Tips
Advertisement - Continue Reading Below
Paddle Boarding Tips for Cross-Training
A Cardio Core Workout for Runners
3 Foot Exercises Every Runner Should Do
Why You Should ‘Chunk’ Your Next Long Run
Bedtime Stretches to Help You Wind Down
A Treadmill HIIT Workout for Speed and Power
What to Know About Pelvic Floor Stability
How Beach Running Can Boost Your Performance