On a difficulty scale of 1 to 10, the pistol squat is a solid 11. This single-leg exercise demands serious strength, mobility, and control, and if you can’t manage a single rep, well, you’re in good company.

Even the most advanced athlete can struggle to do the pistol squat, says Kaila DeRienzo, a certified personal trainer and RRCA-certified run coach in Orlando, Florida.

The promising news: There are several pistol squat modifications that can help you build up the strength and skills you need to tackle this exercise, and we’ve rounded them up here. We also have more intel on the pistol squat, including how to do the full move correctly, common mistakes to avoid, how often to work it into your routine, and its benefits for runners. Right this way for everything you need to know.

How to do a pistol squat, the right way

Step-by-step instructions for doing the pistol squat safely and correctly:

Are there any common mistakes people make when doing the pistol squat?

The biggest pistol squat mistake, according to DeRienzo, is attempting the full-on move without first building up the proper strength and skills. “It’s not one of those [exercises] that you’re just going to jump right into,” she says. Doing the pistol squat–and really any exercise, for that matter–with improper form can up your chances of injury, so it’s important to first master modifications of the move before you try the full-on version.

On that note, you may never be able to do a pistol squat—and that’s totally okay. “It’s a very demanding exercise,” says Janet Hamilton, C.S.C.S., exercise physiologist, and running coach with Running Strong in Atlanta. So if you work towards it for months and still can’t nail it, give yourself a break.

But if you do feel ready to attempt the full-on version of the pistol squat, it’s super-important to first warm up your ankles and hips, since the movement requires a lot of flexibility, balance, and control. Moves like ankle circles, the pigeon stretch, and frog stretch can help you properly prepare, says DeRienzo.

To avoid these form pitfalls, it can help to have someone else around to watch your form and spot you if needed, says DeRienzo. If that’s not an option, monitor your form in a mirror, she adds.

What are the benefits of the pistol squat?

Because the pistol squat is a single-leg exercise (meaning, you perform the exercise using one leg at a time), it can help you identify imbalances in strength and mobility that may exist between sides. Once you’ve identified these imbalances, you can then work to correct them and thus reduce your risk of injury, because one side won’t be compensating for the other.

The single-leg element also makes the exercise great for building strength, because you have to perform reps with the strength of just one leg, compared to a traditional squat where both legs are pitching in. With the pistol squat, “you have a lot of muscle groups working at once,” says DeRienzo, including a bunch of important muscles used in running, like glutes, hamstrings, quads, and core.

Moreover, the pistol squat requires a lot of stability, control, balance, and flexibility, so by doing this move regularly, you can improve all of these aspects of your fitness, says DeRienzo. And they all pay off on the run, too.

How often should you do the pistol squat exercise?

Because the pistol squat is so difficult, you probably won’t be busting out a ton of reps. DeRienzo suggests starting with 3 to 5 reps on each leg. But if that’s too challenging, then doing just 2 reps per leg is a great place to start.

As for how often you should do the pistol squat or squat variations of any kind, Hamilton suggests between two to four times a week. Just make sure that you pencil in enough recovery time between sessions so that your muscles can properly repair—at least 48 hours is a general rule of thumb.

How do you modify the pistol squat?

If you are new to the pistol squat, you should definitely start with a modification instead of jumping into the full-blown move. Like we mentioned, this will reduce your chances of injury and help you safely work up to the traditional pistol squat. Keep in mind the move will take time, patience, and diligence to master. “This is not something that tomorrow, you’re able to just jump into and be fine after practicing for a day,” says DeRienzo.

Here’s how to progress your regular squats up to a strong pistol squat: 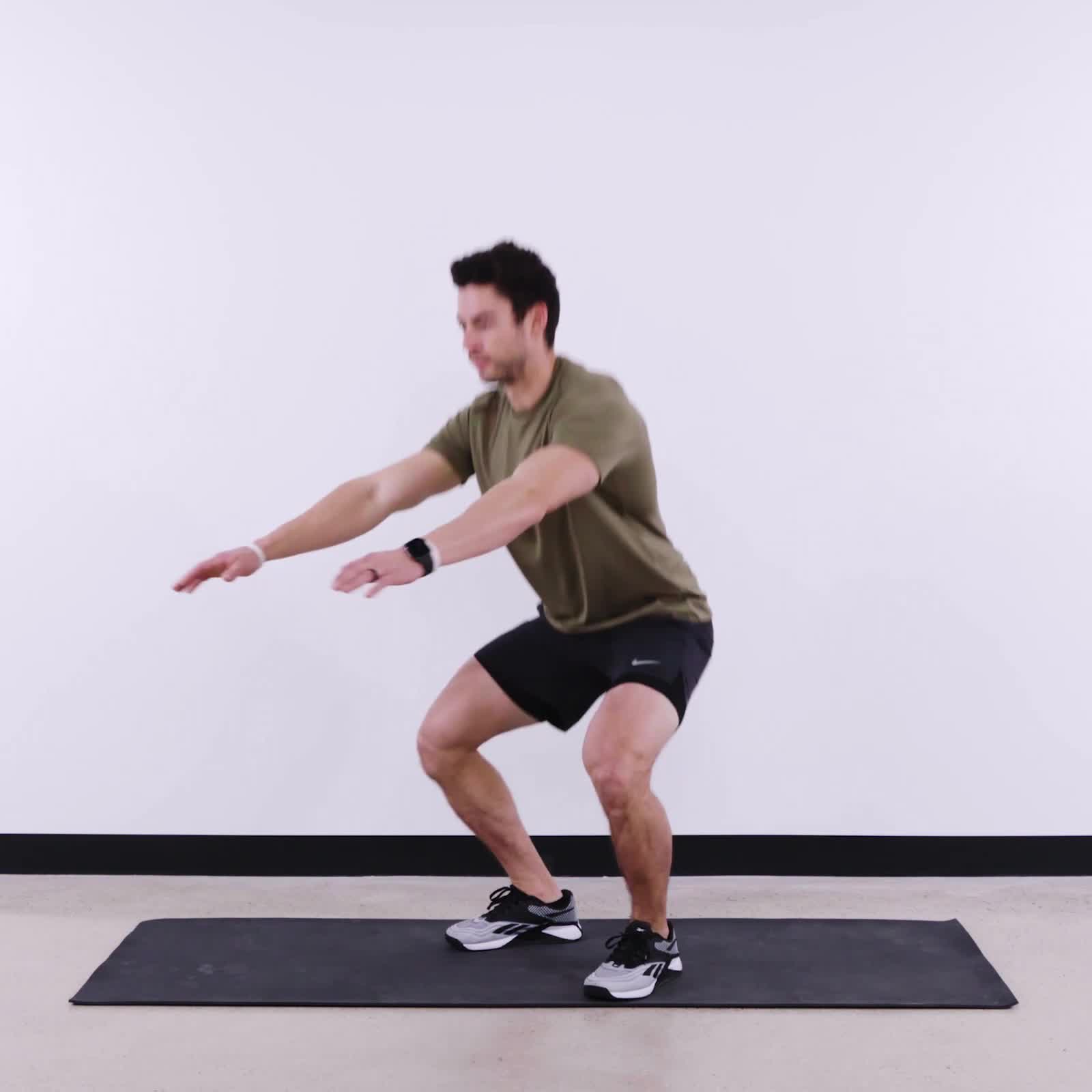 To do a pistol squat, you have to first know how to do two-footed bodyweight squats. Make sure your form is solid with this exercise, meaning both heels are on the ground and knees are in line with ankles, says Hamilton.

From there, you can progress to lunges, Bulgarian split squats, and then the below.

Pistol Squat to Chair With Support 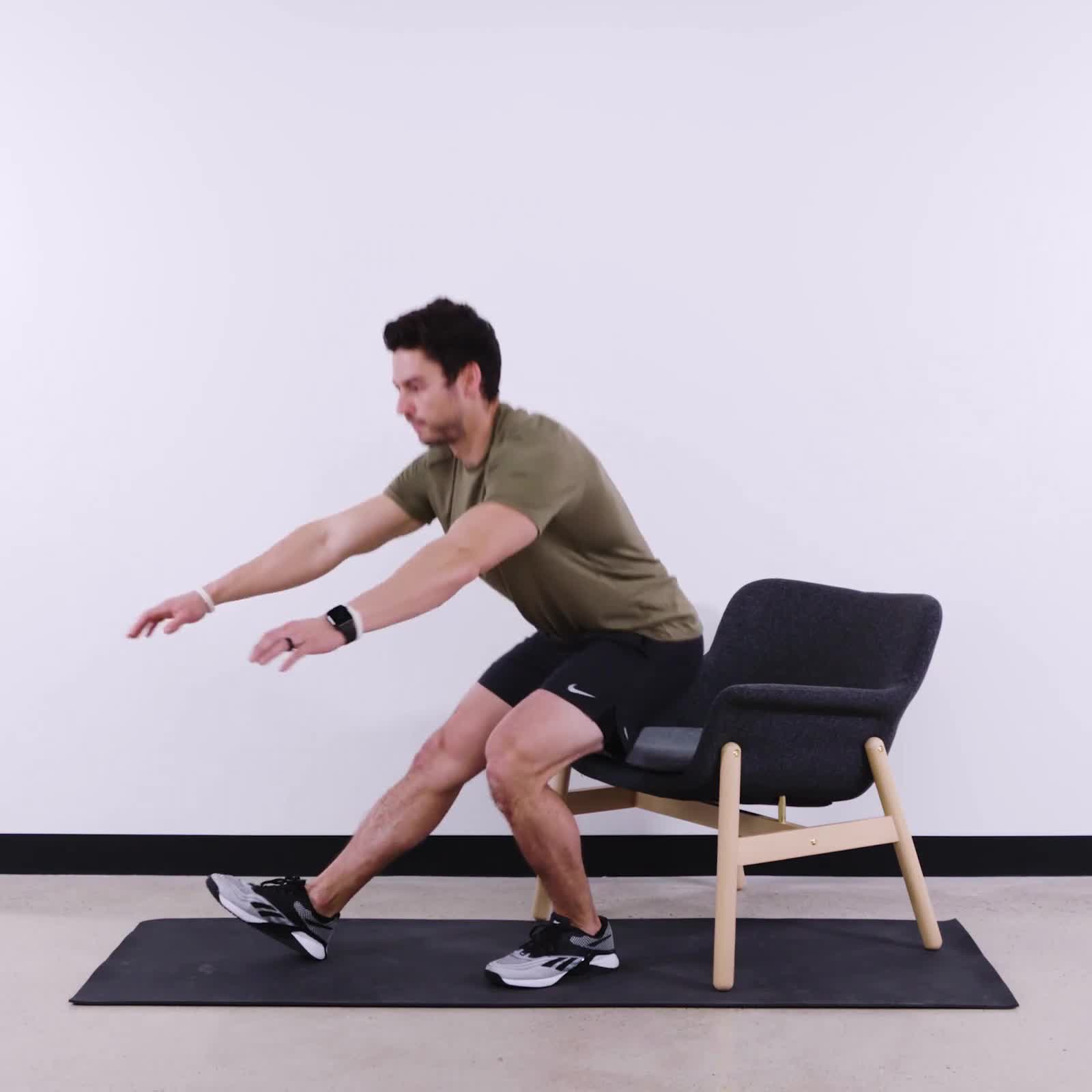 Stand slightly in front and facing away from a bench, chair, or your couch. Do the pistol squat as described above, but keep the heel of the extended leg on the ground and stop when your butt touches the bench. Then stand up. This modification, from DeRienzo, makes the pistol squat easier by reducing the range of motion and offering extra stability. 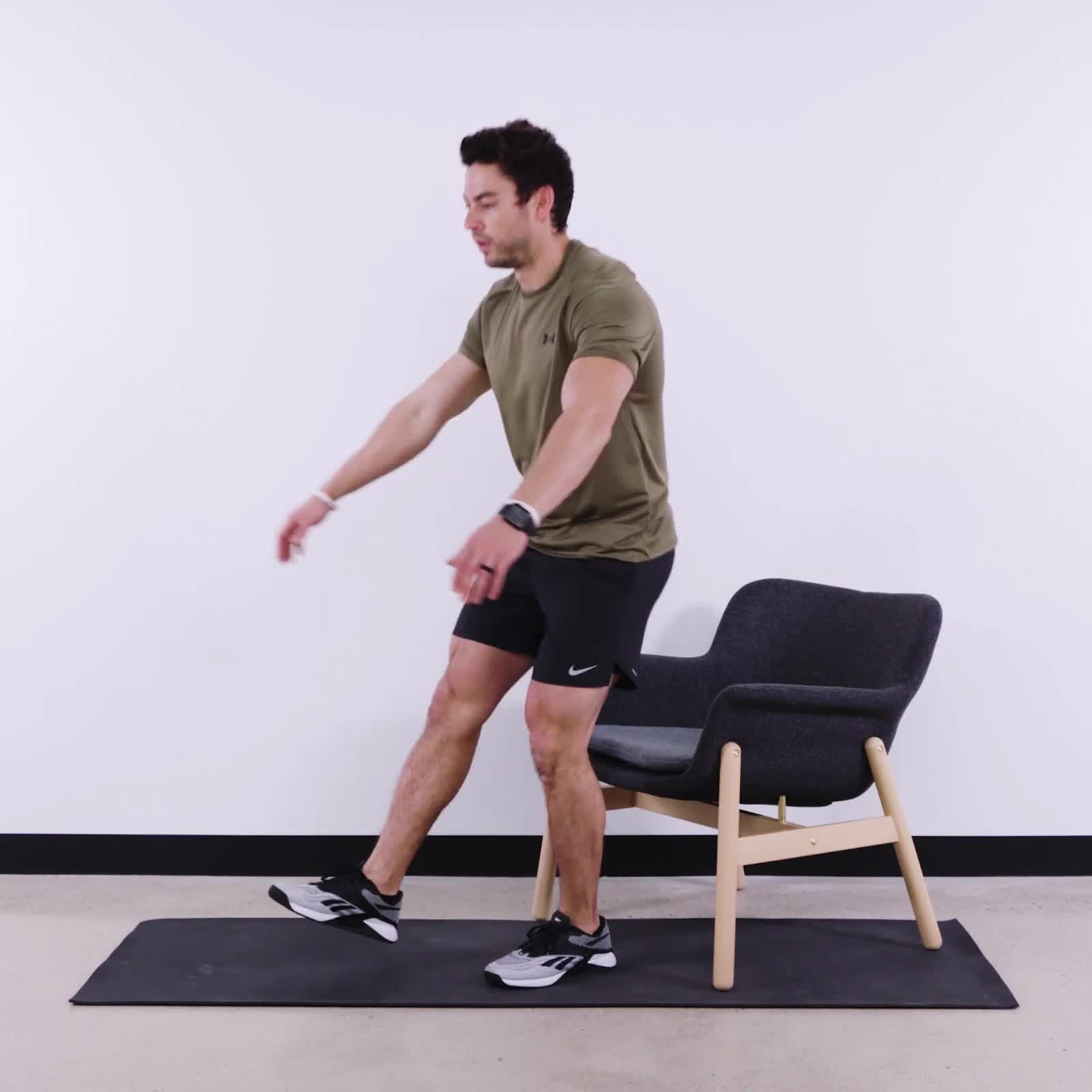 Take the move above to the next level by lifting that extended leg and taking your pistol squat to the bench, chair, or couch, while only standing on one leg. 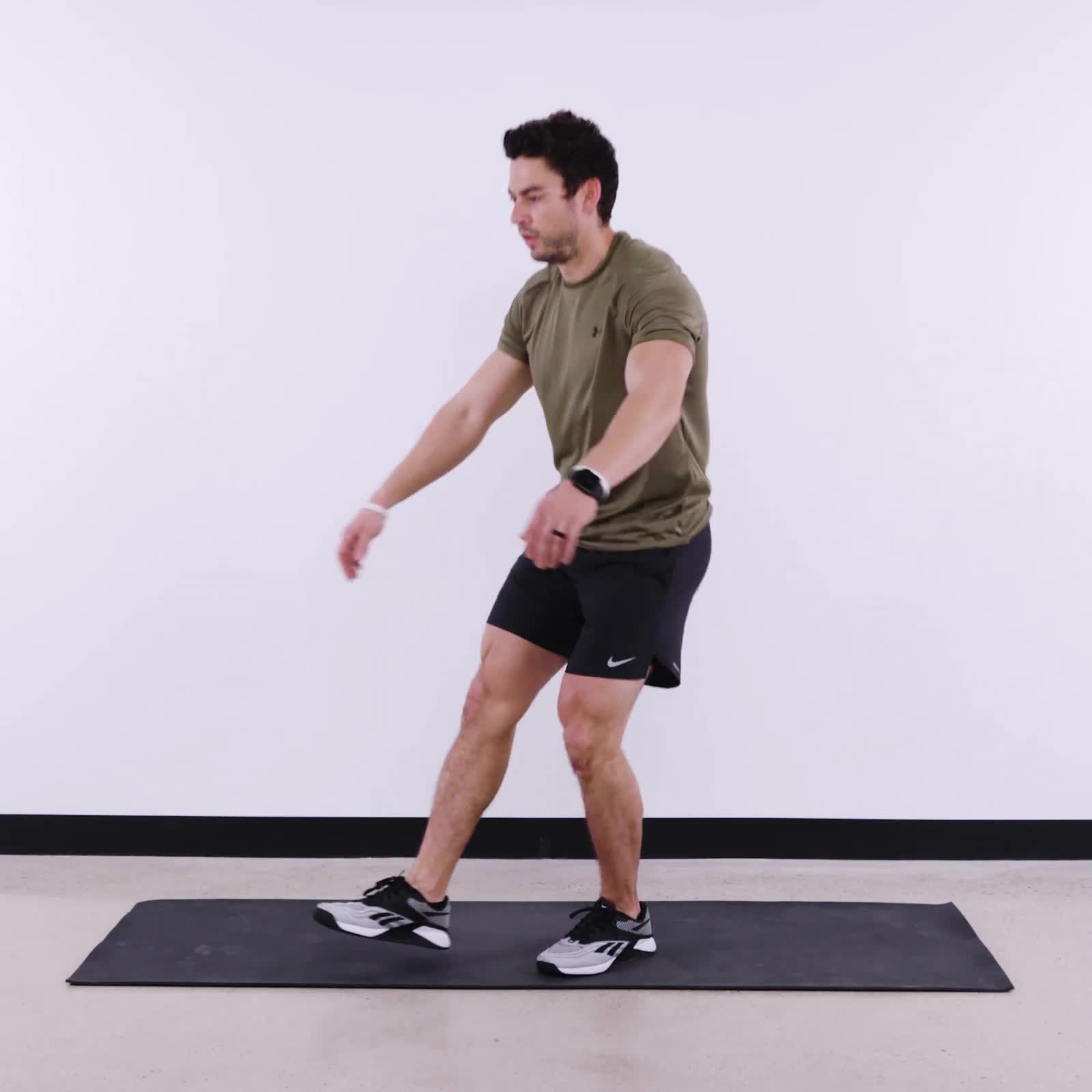 Another modification, which can help you master the downward phase of the pistol squat, you’ll lower down on one leg, just as you would the regular pistol squat. Then, at the bottom, step down with the other foot, and stand back up while standing on both feet. Try to keep the downward motion nice and slow to build up strength in the legs, which will help with the upward motion. 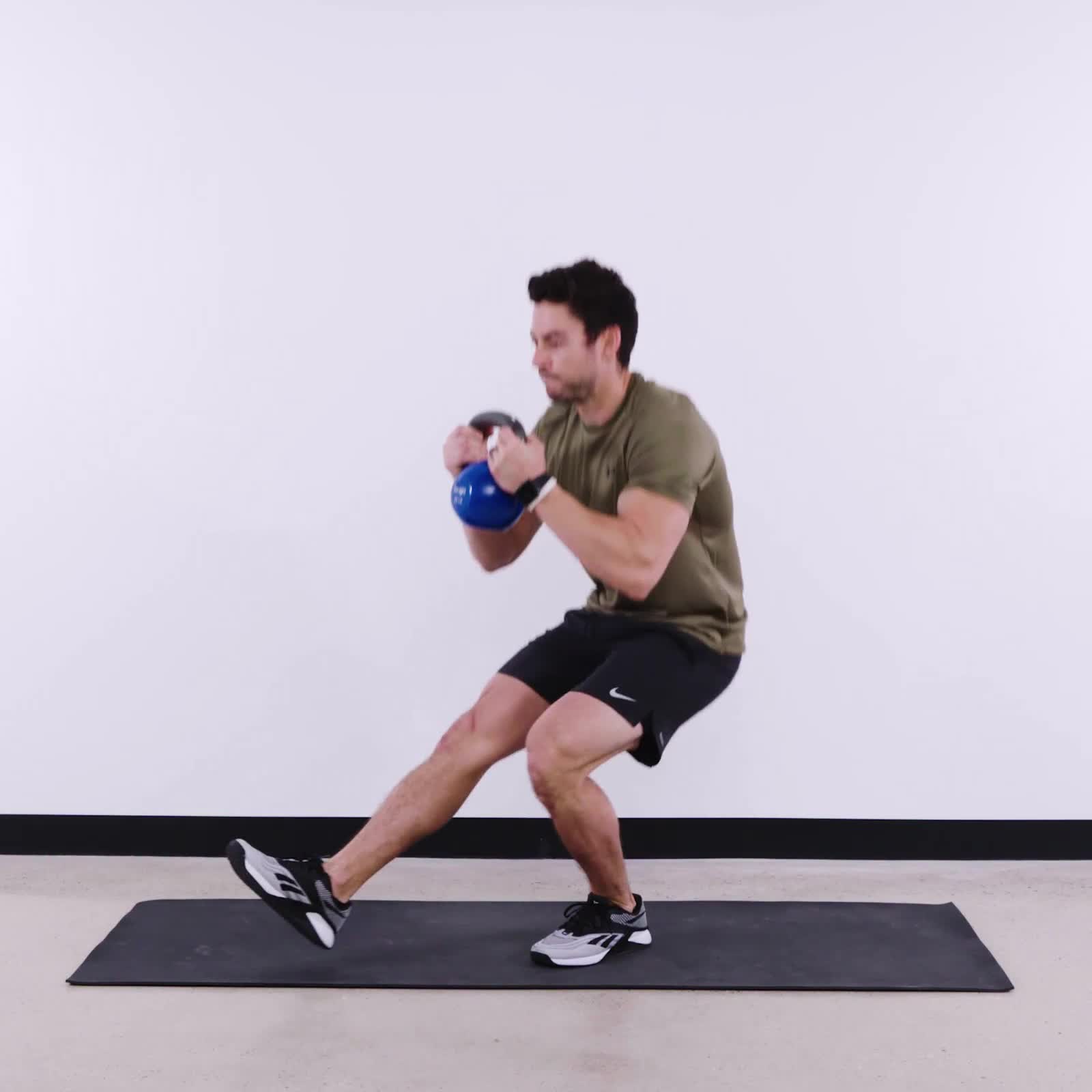 Holding a weight at the chest during your pistol squat provides a counter balance that allows you to move through the exercise a little more easily. With a kettlebell or dumbbell at your chest, stand on left leg, right leg held out straight and off the floor. Perform the pistol squat by sending hips down and back, keeping the chest tall and right leg lifted. Drive through left foot to stand back up. Repeat. Then switch sides.