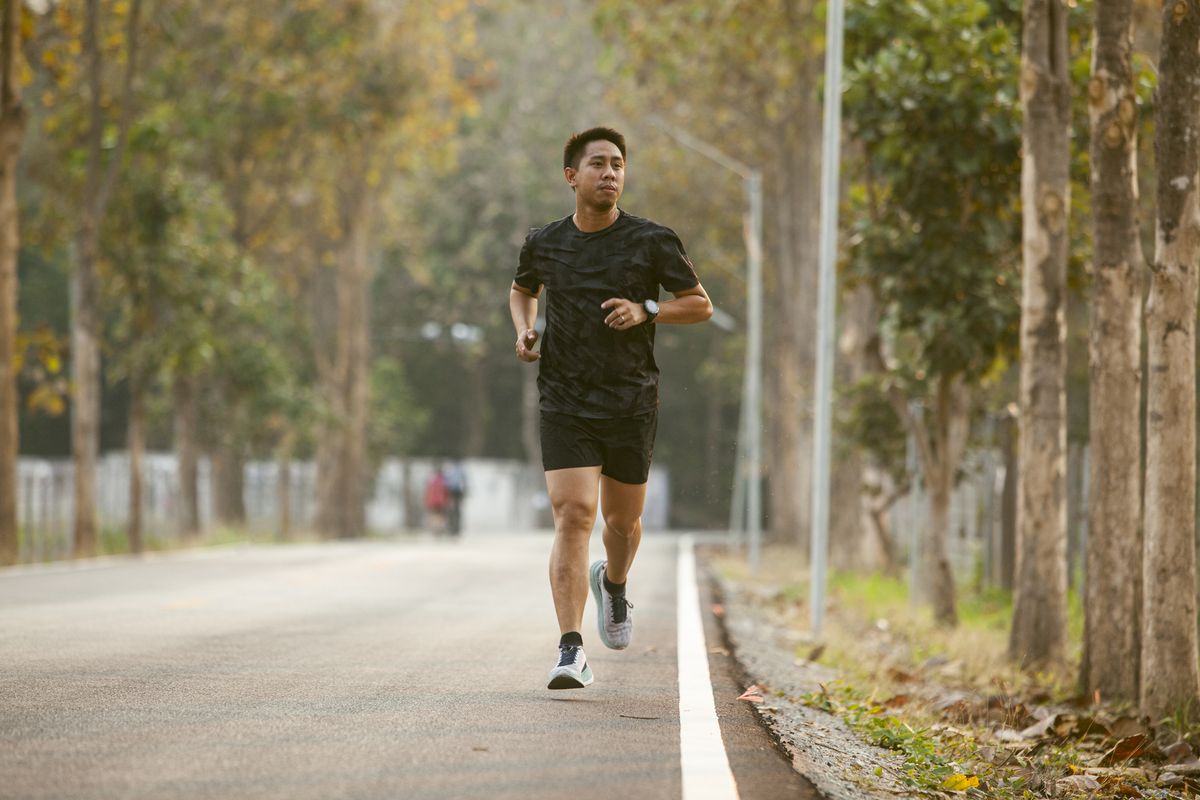 The wait is finally over. From local 5Ks to big-city marathons, races are back on the horizon and runners are lacing up their shoes with specific, competitive goals in sight. But as they shake off the rust, what should they keep in mind? At TrainingPeaks—an online platform where endurance athletes can find coaches and training plans as well as track, analyze, and plan their training using the TrainingPeaks app—Matt Fitzgerald dispenses his wisdom to clients of all levels. As runners navigate their way back to the start line, the renowned endurance coach shares his top tips for getting back out there with Runner’s World.

“Every single run you do can give you valuable information if you’re mindful,” says Fitzgerald, who encourages runners to utilize the tools available on TrainingPeaks to monitor their progress. Starting out, he recommends relying on your body’s feedback, noting how difficult various paces feel, and assessing how you cope with hard workouts or increases in volume. After getting a handle on that, runners can look deeper at heart rate or GPS data.

Get ready for the start line with the right training plan

Get ready for the start line with the right training plan

At TrainingPeaks, Fitzgerald has race-specific plans available for all levels, and as runners start out on that journey, he recommends they do a “measuring-stick workout” to assess fitness. This could be anything from an all-out mile to a session at critical velocity (the pace you can maintain for 20 to 30 minutes). Fitzgerald suggests doing 4 x 4 minutes at that pace with two minutes active recovery to learn what pace you can maintain for an upcoming 5K or 10K.

“If you start off too hot you won’t be able to lie to yourself—you’ll know there’s no way you can sustain it for 30 minutes straight,” he says. “You’ll come out with a better assessment of how fit you are and that allows you to dial in better your intensity for future sessions.”

To ramp up intensity but keep injury risk low, hills are one of his favorite workouts. “Hills combine a strength and power development stimulus with the benefits of high intensity, but it’s lower-impact,” he says. “Even if you’re training for a long, flat event like the Berlin Marathon, science shows runners will perform better if they do short, high-intensity repetitions in training.”

With his TrainingPeaks clients, Fitzgerald schedules hill reps earlier in programs to “build a bridge to the track.” A typical workout might be 10 x 1-minute climbs with 2 minutes active recovery but the reps can range from 30 seconds to 5 minutes, with recovery usually double.

“Comparison is the thief of joy and for a lot of runners it’s their comparison to their best self,” Fitzgerald said. “Train as the athlete you are today, not the athlete you were yesterday or last year.” He believes many are at risk of over-training as they get back racing, keen to reach their previous level quickly despite the time away.

“Maybe that first training cycle is (about) shaking the rust off, getting back, and pushing a new foundation. Then race number two is where you really start to become a PR-chaser again,” he says. “If you rush it, you might run better in your first race, but you probably won’t be running better a year from now.”

Get ready to hurt

Whether it’s a fast and furious 5K or a drawn-out marathon grind, nothing hurts quite like racing, and Fitzgerald believes it’s crucial to include workouts that expose you to that before race day. “You’re going to have to learn how to go deep in the pain cave again,” he says. “We always forget how much it hurts.”

He recommends runners do a handful of workouts such as those described above but with a short, all-out rep to finish. “The discomfort you experience is actually the primary objective; it’s not about hitting certain times,” he says. “It’s not unwise or reckless, but it will set you up to be better prepared for how the race is going to feel.”

Fuel with a specific goal

Fitzgerald has written several books on nutrition for endurance athletes and he believes runners returning to racing should ask themselves what their goal is at different stages of the training cycle. “One mistake many make is trying to have it both ways: eating for weight management and eating for performance,” he says. “The rules are a little different. The best way to eat to shed excess body fat is not the best way to eat when trying to handle heavier training loads.”

If you feel like you want to do two things—shed body fat and get fitter—don’t do them at the same time, Fitzgerald advises. “You can’t co-prioritize them, so if you have time to play with,” he goes on, “I’d devote a few weeks to a weight-loss program up front where you eat and train without increasing (workload), then shift to performance mode and partition your training and diet regarding your top priority.”

Most runners will be giddy with excitement when they get back on the start line but to avoid sabotaging your race, don’t set off like a bat out of hell. “If you’re racing a 5K, have a plan,” Fitzgerald says. “Choose the fastest pace you’re 100 percent confident you can sustain and run the first 800 meters at that pace. Be disciplined and at that point assess how you feel. Was it easier, harder, or about what you expected? Then dial up, down, or maintain your pace accordingly.”

Whatever the result, runners shouldn’t be discouraged given they’ve been out of the habit of racing for so long. “You’ll get there but this is a game for the patient,” Fitzgerald says. “Give it time.”

Cathal Dennehy is a freelance writer based in Dublin, Ireland, who covers the sport for multiple outlets from Irish newspapers to international track websites. As an athlete, he was Irish junior cross-country champion and twice raced the European Cross Country, but since injury forced his retirement his best athletic feat has been the Irish beer mile record. He’s happiest when he’s running or writing stories about world-class athletes.