Today's Top Stories
1
Our pick of the best treadmills for 2022
2
6 exercises to warm up before a run
3
The best Asics road and trail running shoes
4
How to start running today: a beginner's guide
5
Best carbon road bikes under £2,000 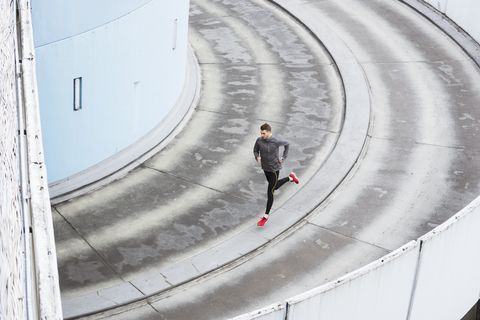 What runner doesn’t want to run farther, faster, and with less effort? It’s the dream, right? And the truth is, most runners know it’s possible to get better with practice and training, but the reasons why this improvement occurs may seem more elusive. Those reasons, though, don’t have to be—scientists have done the research to explain the improvements, and they boil down, in large part, to individual increases in a simple but important measurement: VO2 max.

It shouldn’t come as a surprise that as you start running, your body undertakes a series of physiological changes designed to support your increased effort. Two of the most obvious changes are that you start breathing harder as your heart starts pumping faster. You need this increase in breath rate and heart rate (your heart pumps the oxygenated blood to your working muscles) because your body requires oxygen to create energy for sustained cardiovascular exercise. The more oxygen you can efficiently consume and use, the easier exercise will feel at a given intensity level. That, in very simple terms, is the benefit of training to improve your VO2 max.

Try this
Take your own VO2-max test

“VO2 max is the measurement of the maximum oxygen delivery and utilisation for cardiovascular exercises,” says Jamey Plunk, Ph.D., professor of exercise science at the University of Mary Hardin-Baylor. “It’s trainable and de-trainable, and to some extent, it’s governed by genetics—any individual will only be able to reach their genetic maximum potential VO2 max through training.” So while just about everyone can improve their VO2 max, not everyone has the genetic potential to be Eliud Kipchoge.

Plunk also points out that very few people ever reach their maximum genetic potential for VO2 max due either to a lack of motivation or a lack of training knowledge. This is important to understand, because a high level of motivation to get better at running will only take you so far. You have to know how to effectively train for the sport if you want to see the greatest improvements over time.

What are the benefits of Increasing Your VO2 Max?

The most obvious benefit of increasing your VO2 max is the potential improvements you’ll see in your running performance. For instance, if you’re looking to shave off seconds from your half marathon times, an increased VO2 max is one element that can help you get there. Part of this is due to the potential you have to increase your anaerobic threshold as you train for VO2 max.

If you’re unfamiliar with the anaerobic threshold, it’s essentially the breakpoint where your intensity level is too high to keep up with the energy demands required for exercise that are provided through oxygen consumption alone (aerobic means “with oxygen”). Even as you breathe harder and harder, you start feeling your working muscles burn, indicating that you’re not getting enough oxygen to create the energy necessary to sustain the level of effort you’re exerting. Your body has started to use anaerobic systems (anaerobic means “without oxygen”) to help you continue to move. Eventually, you have to slow down or stop, returning to an aerobic level of intensity.

“A higher VO2 max is also indicative of a higher anaerobic threshold, which, by definition, means a higher level of lactic acid tolerance. Functionally, this means that a level of exertion that used to be anaerobic and short-term for you—producing lactic acid—can now become aerobic with longer duration potential,” Plunk explains. In other words, if sustaining a pace of 8:30/mile for more than five miles used to make your quads burn, the better your VO2 max, the greater chance that you’ll be able to sustain that pace for more than five miles, or improve your pace for the same length of time.

Even if you don’t have any major performance improvement goals, an improved VO2 max can also be a boon for general health. “An increase in VO2 max is essentially an improvement in cardiovascular capacity for any kind of work. This type of improvement reduces the daily workload on the heart,” Plunk says. And given that cardiovascular disease is still the leading cause of death in the United States, most Americans hearts could benefit from being a little less taxed during day-to-day activities.

How to Increase Your VO2 Max

If you’re even modestly familiar with the concept of VO2 max and its improvement, you probably won’t be surprised to hear that high-intensity interval training (HIIT) is considered one of the best ways to increase your measurements. Study after study confirm that HIIT training of this type can effectively improve your VO2 max. This is because HIIT causes you to toy with or temporarily surpass your anaerobic threshold before returning to a lower, aerobic, intensity. This type of overload causes your heart and lungs to adapt to the demands being asked of them.

“The process of raising a VO2 max is similar to increasing strength gains in a muscle,” Plunk says. “A muscle will only gain up to what is demanded of it. It will not get stronger than what is customarily required. The same applies to VO2 max. If a higher demand is placed on the cardiovascular system, then the capacity to tolerate those demands will increase up to a genetic limit.” This concept explains why constantly running the exact same distance at the exact same pace for the exact same times won’t help increase your VO2 max beyond any initial gains you may have experienced.

If HIIT workouts just aren’t your thing though, there’s good news. Plunk says that any workout that’s done regularly and places a higher, continuous demand on the cardiovascular system can increase your VO2 max. The key is that you should be working at an intensity right below your anaerobic threshold (the point at which you start feeling lactic acid build in your working muscles), and you should exercise at this level of exertion for at least 15 minutes. Beyond intervals, Plunk suggests continuous hills, tempo running, cycling, swimming, or any cross-training activity that places similar demands on your system.

Whichever method you choose, the key is to stick with it. Increasing your VO2 max won’t happen overnight, but the more fit you are, the more time it takes to see the improvement. Plunk says if you’re out of shape to moderately fit, you may see improvement in as little as four to six weeks, and if you are very fit, it could take as long as four to six months.

“Remember that VO2max is limited by genetics, although seldom do any of us limit our potential due to genetics,” he adds. “Most of the time, it is discipline or motivation or both.”

From: Runner's World US

Advertisement - Continue Reading Below
More From Training
Why are Ethiopian endurance runners so successful?
3 circuit workouts to build strength and speed
Advertisement - Continue Reading Below
Should you ice before a run?
The best Santa runs in the UK
How often should I strength train?
Chris McDougall talks Born to Run 2
Andrea Mason's incredible sea-to-summit challenge
4 best glute stretches for runners
6 ways to train like Kilian Jornet
The 3 best quad stretches for runners